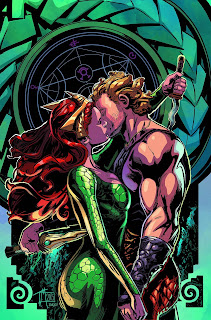 I love Aquaman. I'm not sure what precisely it is about him that I like; it may simply be that I enjoy a good underdog, and feel sorry for the constant derision with which he's met by comic book readers over the decades. I think part of the appeal is that, more often than not, he's less a superhero and more the star of an underwater fantasy. He's the king of Atlantis, and spends most of his time fighting against incursions by surface dwellers, internal strife, undersea monsters and the like. There's something really good in the character that has the potential for great comic books.

And some of them have been really great. I adored Peter David's lengthy run in particular, and have been a pretty big fan of what Geoff Johns and Jeff Parker did with the character in the New 52. Since Convergence he's been written by Cullen Bunn. The latest issue, #42, came out today.

Story-wise it's okay: the narrative jumps from the past to the present, as we slowly discover what terrible threat to Atlantis led to Aquaman being ousted as king and hunted across the seven seas by his vengeful ex-girlfriend Mera. Art-wise it's less successful. This book feels badly rushed.

The proof is in the credits, which have Trevor McCarthy providing "layouts" with McCarthy, Jesus Merino and Walden Wong all credited with "finishes". The multiple artists give the issue a very scrappy, unfinished and inconsistent look that gets in the way of the story being told. It's felt of late that Aquaman has been a really solid book, but if they put too many issues out like this I suspect the readership will begin to look elsewhere. (2/5)

DC Comics. Written by Cullen Bunn. Art by Trevor McCarthy, Jesus Merino and Walden Wong. Colours by Guy Major. (Note: the cover depicted here, which is how the issue was solicited to readers, is not remotely the cover with which it came.)

Under the cut: reviews of The Fly: Outbreak, The Infinite Loop, Star Trek and Winter World.

I am still slightly perplexed that this miniseries has been quite as good as it has been. The storyline, a bleak horror that follows on from The Fly II, is significantly better than its source material. The artwork is painterly and atmospheric. Altogether it reminds me the most of those excellent early Aliens miniseries produced by Dark Horse Comics back in the early 1990s. This issue has some particularly gorgeous two-page spreads, utilising clever panel layouts to tell the story. It's an excellent book. (4/5)

Beautiful artwork and colouring. Outstanding panel layouts. An increasingly complex storyline, that in this issue actually becomes maddeningly difficult to follow at times. This issues sees the protagonist Teddy track through her own life story as the timelines crumble around her and she desperately races to bring her lover Ano back into existence. I think this story is too complex to play out in monthly 20 page increments; in a collected edition it will likely read much more satisfyingly. Keep an eye out for it once the miniseries is done. There's good stuff here, it's just a little tricky to get my head around at times. (3/5)

One of the odder things that IDW's Star Trek series does is re-envision original Star Trek episodes with the reboot cast and a fresh angle on the storyline. On the one hand it feels a little sacrilegious to muck around with classic 1960s television, but on the other it does offer some interesting creative opportunities. Sadly this issue doesn't really take those opportunities up, resolving its storyline - a re-do of "The Tholian Web" in ridiculous fast time. This isn't a bad comic, it just feels too slight to really be worth bothering with. (2/5)

All hell breaks loose in this final issue, as it is wont to do in such issues: savages have boarded the Holiday, and an attempt to break free of the pack ice only winds up scuttling the ship. Scully now has to escape before the ship sinks, and rescue Wynn at the same time, and not get killed by the bloodthirsty and enraged boarders. This issue is simply rock-solid storytelling from beginning to end: it has a tight, well-paced script and no-nonsense, beautifully straight-forward artwork. (5/5)
Posted by Grant at 10:31 PM