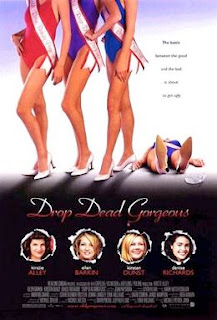 1999 was a year so ridiculously packed with great American films that it's easy to overlook the minor ones in favour of the big leagues. To an extent Drop Dead Gorgeous slipped through the cracks at the time, which is a pity. It's a pitch-perfect satire of a certain breed of American culture, played out by a great cast of actors and a nicely sharp edge to it. To date it's the only feature film directed by Michael Patrick Jann, and that seems like a shame. This one was so good I would really have liked to have seen more.

The film is a mockumentary following the small town heat of a popular beauty pageant. We follow the efforts of 17 year-old Amber Atkins (Kirsten Dunst), a tap dancer who works after school as a mortuary beautician and who has dreams of becoming America's next Diane Sawyer. In her way is Becky Leeman (Denise Richards), the too-perfect daughter of the richest man in town, whose mother Gladys (Kirstie Alley) is also in charge of running the pageant. The stakes are, let's be fair, extremely low - it's a beauty pageant - but they're treated by all involved as if they're ridiculous high, so much so that contestants start getting murdered to take them out of contention.

The film keeps a nicely low-key tone, shot very much in a handheld fashion with a combination of observational footage and head-and-shoulders interviews. This keeps the focus on the characters, who form the bulk of the film's humour.

The cast are pretty much uniformly great, whether it's Dunst's ridiculously wholesome Amber, Denise Richards in a career-best turn as the ruthlessly cruel Becky, or Kirstie Alley's ambitious and mean-spirited Gladys. Supporting actors include Ellen Barkin and Alison Janney as Amber's drunkard mother and her mother's over-sexed best friend, Sam MacMurray as Becky's furniture salesman father or Mindy Stirling's awkwardly obedient pageant assistant. Other contestants are played by several extremely talented women including an early performance by Amy Adams and a wonderful turn by the late Brittany Murphy, whose comic timing was always stunning.

It's not entirely perfect. The mystery over who could be trying to murder the constestants isn't really given too much attention, and doesn't really twist or surprise the viewer. The film also suffers from an overly long denouement. The energy is pretty much gone from the piece 10 minutes before it actually ends. In the main, though, it's a short, sharp, funny little piece of satire, ruthlessly picking to shreds that weird American institution of the beauty pageant.
Posted by Grant at 10:52 PM