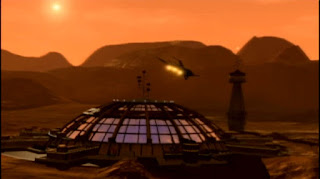 Marcus (Jason Carter) and Franklin (Richard Biggs) arrive on Mars to meet with its resistance leaders. Sheridan (Bruce Boxleitner) is forced to take a day's vacation, which he spends challenging Garibaldi over the comments he made to ISN.

Let's get the weird question out of the way first: why is Dr Franklin undertaking a top-secret espionage mission to Mars? He's Babylon 5's chief medical officer - one would think his talents would be better used in his substantive position. Of course, there's a clear reason of behind-the-scenes pragmatism behind the choice. Who else in the regular cast is actually available to go? It's also a relief to see Richard Biggs get a chance to do something, since he's only had short scenes and cameos since the season began.

The Mars storyline is a bit dull, really. For the most part it's a bunch of meetings with stereotypical characters who say stereotypical things. There's a bit of advancement for the post-Shadow plotline, as a contact turns out to be under the control of the same kind of 'keeper' parasite that's affected the Centauri Regent. That said, everybody else seems remarkably relaxed about the idea that alien parasites have infiltrated their resistance group. Surely at least one of them should have completely freaked out at the thought?

Back on the station, Garibaldi's relationship with Sheridan deteriorates to the point of fist-fighting, and a shady group of strangers drag Garibaldi into a conspiracy to have Sheridan kidnapped for his own good. Once again the stereotypes come thick and fast. For his own part Jerry Doyle does a very good job, Bruce Boxleitner less so, and the script they're delivering really doesn't work all that well. It's a weird mixture of cliche and misplaced humour - for some reason Straczynski throws a joke into the middle of the episode's most dramatic scene.

There's also the matter of Sheridan and Delenn's next romantic ceremony, which is basically an excuse to write some painfully awkward comedy. I felt genuinely sorry for the actors for having to perform those scenes.

You could easily skip this episode entirely: just know that Garibaldi is now working directly against Sheridan, and Franklin and Marcus are on Mars meeting with the anti-Earth Alliance resistance, and move on. So: ten episodes in, six good ones, and a quality ratio of 60 per cent.