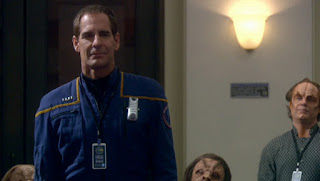 It's 13 May 2005, and time for the penultimate episode of Star Trek: Enterprise.

Trip, T'Pol and their cloned infant daughter are the prisoners of the Terra Prime terrorist group. A super-weapon is aimed at Starfleet Command from Paxton's Mars base, and Captain Archer can't get close without risking the Enterprise's destruction. The clock is ticking down on Paxton's demand: that all non-humans evacuate the planet Earth for good.

There's a general trend in Star Trek for the second half of a two-part story to be a bit of a letdown. The franchise has always been great at setting up critical situations and building to sensational cliffhangers, but never quite as effective at stepping down from those cliffhangers and providing sensible, entertaining conclusions. This is the final second-part episode of any Star Trek series, so it's actually a relief to see them pull off a pretty outstanding finale. It's not perfect, and has one or two very silly elements that get in its way, but all up it's a really solid hour of television.

Let's get the silliest part out of the way: Terra Prime have a massive super-weapon on the surface of Mars that's trained on Earth. In particular, it's aimed directly at San Francisco. Now I'm no scientist - actually I'm a drama major - but I can't imagine the odds of a massive laser beam being situated at exactly the right angle to hit San Francisco from the surface of Mars. For one thing, that's a really long way for that super-beam to travel. Even once they fire it Starfleet Headquarters would have between three and twenty two minutes to evacuate, depending on the relative positions of the two planets and assuming the weapon's beam shoots out at the speed of light. I'm also pretty sure both planets rotate, and at different speeds, so the odds of Paxton having line of sight of San Francisco for more than a few minutes seem pretty remote.

It's also a fairly wacky idea to relocate Paxton's entire mining facility via warp drive from the moon to Mars: I'm not really sure it achieves anything, plot-wise, that couldn't have been achieved by leaving it where it was.

Silly relocation plans aside, Paxton is a great character. This episode not only continues to drive home his unpleasant bigotry, it reveals his hypocrisy as well. He's suffering from a degenerative illness, the treatment for which was only found via contact with alien species: he's only alive because of the aliens he despises so much. This rang very true, since there's been no shortage in the real world of loathsome bigots with stunning hypocritical attitudes and lifestyles. Peter Weller plays the part brilliantly, and as Star Trek's final proper villain on TV he sends things out on a high note.

It's nice to see Travis Mayweather get a subplot, as his new girlfriend turns out to be a Starfleet intelligence officer. He's the character least well served by scripts in the series, and I've always felt sympathy for poor Anthony Montgomery who's been plugged away on fumes for the past four seasons. At least they squeeze one little bit of story for him as we near the end.

The episode's emotional centre is Trip and T'Pol, who are really put through an emotional wringer here. They're prisoners of Terra Prime, their lives are constantly under threat, and the daughter they've only just met is being paraded to the media as some kind of horrible monster - a warning of things to come should humans inter-breed with alien species. When T'Pol discovers that their daughter, whom they name Elizabeth, is dying, it throws the whole episode into a very different kind of emotional wringer. Both Jolene Blalock and Connor Trineer play their parts exceptionally well.

So where does this episode leave us? The anti-alien movement appears to be quashed. An alliance of planets is to be formed, uniting a small group of space-travelling civilizations for the first time. It's clear that, in time, this alliance will develop into the United Federation of Planets. In short: if you stood on a box you could now easily see Kirk, Spock and the USS Enterprise on the horizon. At the same time the long-running relationship between Trip and T'Pol has reached a natural point for us to step away. They've suffered a terrible loss, finding a child and then losing it, but it really does feel as if they're at an emotional point to finally commit to a romantic relationship once and for all. All in all it's a measured conclusion, both happy and sad, that both wraps things up and demonstrates that for the characters the story will go on without us. It is a marvellous series finale.

That's actually its biggest problem, because it's not the series finale. There's one more episode to go, and as we'll see when we get to it in a day or two it doesn't do the job nearly as effectively. In fact, there's a very strong argument to ignore it entirely and let this be the final word on the series instead.

21 episodes into the season, and we've had 10 good episodes. The quality ratio stands at 48 per cent.
Posted by Grant at 7:29 AM