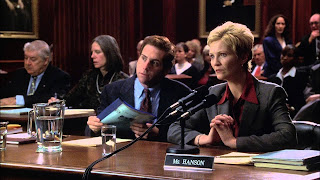 When the USA's Vice-President unexpectedly dies, the President (Jeff Bridges) passes over his most obvious choice in favour of a female Senator (Joan Allen). Between her and the Vice-Presidency is a series of confirmation hearings, whose leader (Gary Oldman) appears intent on doing anything in his power to stop her from succeeding.

The Contender is a film stacked with outstanding actors delivering great performances. It's got Jeff Bridges as a President nearing the end of his second term, and keeping one eye firmly on his legacy. It's got Joan Allen as Laine Hanson, an idealistic left-wing Senator facing a barrage of misogynistic attacks. It's got Gary Oldman playing the Congressman behind those attacks, as well as Christian Slater as an up-and-coming young politician and William Petersen as the jilted Senator denied the chance to become Vice-President in Allen's favour. If you were to rate a film purely based on its cast, then The Contender would be a cinematic home-run. If you were to also rate it based on the quality of its screenplay, then The Contender winds up an unfortunate misfire.

It starts promisingly as it sets up its characters and its situations. Unfortunately as the story develops, writer/director Rod Lurie starts pulling his punches. He begins to take the easy way out of his story, Democrats become faultless idealists. Republications become moustache-twirling villains. Any chance of nuance goes out of the window. One plot thread is resolved with something that feels as if it was cribbed from an episode of Scooby Doo.

For a while it seems as if the film is going somewhere rather interesting, as the attacks on Hanson revolve around an alleged threesome in which she participated in college. Hanson refuses to respond to the allegations, because she doesn't believe her private sexual behaviour is anybody's business or indeed relevant to her job as Vice-President. That's certainly a position with which I agree. By the film's conclusion, however, Lurie can't help but reveal that Hanson never engaged in any kind of sexual misadventure: she simply was standing up for the principle that it wasn't relevant to discuss. In essence he is arguing against one attitude in his film while simultaneously wallowing in it. He simply can't bring himself to make the accusation true, because then it would stain the whiter-than-white characterisation of his protagonist. It's an unusual creative strategy to put the best argument against your screenplay inside that exact screenplay, but somehow Lurie manages it. It makes for a very weak film.

Lurie went on from The Contender to create and produce the short-lived television drama Commander in Chief, which suffered from many of the same problems: great actors shoe-horned into trite and superficial storylines. Given the calibre of cast involved, this film could have been so much better. It should have been so much better. Instead it's a tremendous disappointment.
Posted by Grant at 7:00 PM