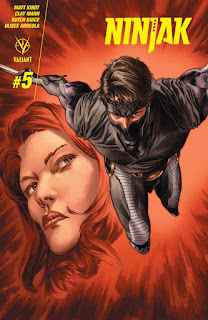 Ninjak is two steps from the Weaponeer, the illegal arms trader he's been sent to assassinate. Sadly one of those steps is the Weaponeer's martial artist bodyguard: the mysterious Roku. The other is the Weaponeer himself, who may not be as defenseless as Ninjak thought.

Ninjak is a flat-out fun read. The premise - James Bond meets ninjas - is ridiculous, but writer Matt Kindt goes all out with it. It's not self-aware, it simply takes a silly concept and commits to it one hundred per cent. This is a marvellous comic book for fans of action and espionage. Kindt even throws in some cleverly placed flashbacks to flesh out Ninjak's character via his childhood.

Clay and Seth Mann's artwork is finely detailed and beautifully drawn. Characters are drawn in an idealised fashion, but never a sexualised one. There's often a fine line with this kind of superhero art, but the Manns handle it perfectly.

Like most Valiant titles, Ninjak is simply wonderful action-oriented entertainment. It does what it wants to do, and it does it remarkably well. A few more Marvel and DC fans should consider expanding their interest and accommodating a few of Valiant's titles. (4/5)

Under the cut: reviews of Jem and the Holograms, Teenage Mutant Ninja Turtles, and Transformers: More Than Meets the Eye.

Jem and the Holograms #5

This is just a sweet comic book. I'm not sure what else there is to say: appealing characters, funny dialogue, a simple and enjoyable storyline, cute artwork and some absolutely stunning colours. It's got romance, funfairs, concerts, near-death experiences and food fights. This issue even has a musical montage - how the hell does one even manage to do that in a comic book? It may be slightly too quick to read, but Jem and the Holograms is a wonderfully enjoyable book nonetheless. (4/5)

Donatello still lies in a coma, with his consciousness walking around in a robot suit. That seems to be pretty handy, because the Shredder and Baxter Stockman have pressed their offensive and the Turtles are surrounded by killer 'flyborgs'. This issue is pretty much wall-to-wall action. In terms of story and script it's pretty by-the-numbers: nothing exceptional plot-wise, and the characters all act and talk like you'd expect them to. Cory Smith's artwork is great. It's expressive, dynamic, and showcases the Turtles well. Not a classic comic by any stretch, but certainly an enjoyable one. (3/5)

Transformers: More Than Meets the Eye #43

Firstly I have to say I loved the alternate cover to this issue, which riffs off of Justice League International. As for the inside: this is a genuinely difficult comic to get my head around. It's confusing, it jumps all over the place, and for this issue it's also highly self-aware. It's packed with jokes about being a comic book. Regular readers might have a ball with this; I've been jumping in and out every few months, and that's made the book pretty incomprehensible. (2/5)
Posted by Grant at 7:44 AM