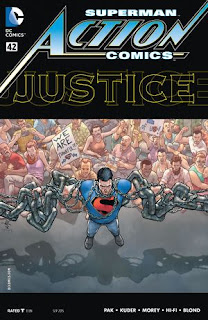 Back when Superman was first created in 1938, he was very much the working class hero. His powers were more limited, and he fought for the common citizen against criminals, corrupt business executives and the like. That's all pretty far removed from Superman today, which is why this current arc by Greg Pak and Aaron Kuder feels so refreshing. Superman has lost most of his powers. His secret identity Clark Kent has been outed to the public via the Daily Planet. Now a rogue police squad is out to take him down, and raze to the ground the inner-city suburb of Metropolis where he's been living.

This is a Superman for the common citizen again. He's not saving the planet from aliens in a blue and red caped battle-suit. He's in jeans and a t-shirt, doing is best with vastly reduced powers to stop the police from crashing into a peaceful protest and send half of his neighbours to the hospital. The story feels more relevant and real as a result. The stakes feel as if they matter more. The nobility of Clark Kent - his simple honour and good nature, his resolute defiance in the face of injustice - is front and centre and fully believable.

I know this is only a temporary arc. I know that within a few months the status quo will inevitably return. For now, however, this feels like a Superman comic that matters again. (5/5)

Under the cut: reviews of Darth Vader, Detective Comics, The Omega Men and Ultimate End.

I was sad to read yesterday of Francis Manapul's departure from this book. For the brief period he was on it, his visually arresting artwork made this one of the first comics I'd grab in its week of release. I was particularly looking forward to seeing his take on the new Jim Gordon Batman, but sadly it is not be. Fernando Blanco has been acting as a last-minute replacement, which might explain why the art looks so scrappy and haphazard: it doesn't feel up to his usual standards. The story is okay, but the Batman elements are definitely a lot less interesting than the scenes between police detectives Bullock and Montoya. If anything I'd like future issues to focus even more on Gotham's police officers and less on Batman.(3/5)

For me, The Omega Men is the standout comic of DC's "DC You" campaign: it's got outstanding artwork with a very French Metal Hurlant vibe to it. It's got some fascinating world-building, and a lot of intrigue courtesy of writer Tom King. It does indeed feature Kyle Rayner, who has not died, and he's one of several 1990s characters I've wanted DC to use more effectively. It also feels markedly different from the rest of DC's titles. This is a proper science fiction comic set somewhere else in the galaxy, far removed from human beings and the planet Earth. The nine-panel layout has ensured each issue has a lot more plot than other titles. It's reminding me a lot of the late 1980s relaunch of Legion of Super-Heroes actually. I'd be surprised if it wasn't an influence. Check this comic out. Support it. I selfishly want it to have a long, successful run so that I can keep reading it. (5/5)

It is absolutely jaw-dropping just how completely awful this comic is. Here we are, three issues in, and there's been no back story revealed, no storyline explained, no characters defined - just a bunch of self-similar superheroes shouting at one another and getting on each other's nerves for 60 pages and counting. Bagley's art is uncharacteristically busy and claustrophobic, and Bendis' script is hands-down the worst thing I've ever seen him write. This was supposed to be the grand finale of the entire Ultimate line of comic books, but instead it's making it all feel like a mercy killing. (1/5)
Posted by Grant at 7:38 AM