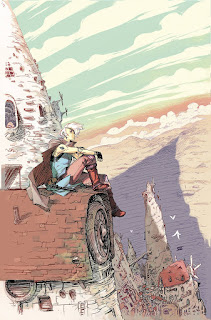 In the middle of a vast desert there is the Spire, a massive towering construction filled with more than a million people - both human and otherworldly. Shå is one such otherworldly figure: not only the last of her kind but also the captain of the city watch. When three people are randomly murdered in the bowels of the Spire, and one of them turns out to be the former nursemaid of the newly crowned Baroness, Shå is sent to solve the crime - or suffer the consequences.

The Spire is a new eight-part fantasy miniseries from Boom Studios. Writer Simon Spurrier is at the top of his game here, providing an extended first issue that's both packed with story and rich in world-building. There's a very strong sense of Mervyn Peake about the characters and the Gormenghast-like citadel in which they live.

It's also beautifully illustrated by artist Jeff Stokely and colourist André May. It has a varied and dynamic panel layout and very subtle, nuanced colours. If the script was influenced by Peake, then the art is influenced by a range of noted artists including Hayao Miyazaki and Jean "Moebius" Giraud.

Everything is set up wonderfully here: I can't wait to see what happens in the remaining eight issues. 'Proud stands the Spire,' claims one overly zealous guard. Proud stand Spurrier, Stokely and May too. This comic is great. (5/5)

Under the cut: reviews of Imperium, Onyx, The X Files and X-O Manowar.

Imperium is a fascinating read, following as it does a super-psychic villain as he establishes his own utopia. This issue seems him lead a mission to steal the world's first cold fusion reactor from a submarine. He's got a great team, including an overly philosophical robot and a psychotic alien zealot. This issue is all action, with Joshua Dysart driving the plot forward with a lot of energy and wit. Eaton and Faucher's artwork matches it well, presenting a sort of classic superhero style that matches the action-oriented script. This isn't Valiant's best title by a long stretch, but it's still entertaining stuff. (3/5)

In the late 21st century the Earth is hopelessly over-crowded, and the United Nations' International Global Defence Corp does its best to keep the peace around the world. When a mysterious meteor crashes into Lagos on a controlled descent, the IGDC is dispatched to investigate - and find both an alien spore transforming the world's animals into monsters, and an alien robot named Onyx that claims it wants to help. This issue is not the best. It introduces a few too many characters at once, for one thing, and thus far doesn't seem to be bringing anything new to the table. Gabriel Rodriguez's slightly over-busy artwork doesn't quite work for me either. It's not awful, but it's also not worth your time and money ahead of other books out this week. (2/5)

This sprawling comic book relaunches reaches its extended climax as Mulder and Scully attempt to escape the new syndicate, and its leader Gibson Praise. It's been a slightly shaky series all in all, but in this final part everything pulls together and packs an unexpectedly solid emotional punch. I really like Matthew Dow Smith's artwork, which is wonderfully restrained and atmospheric: it's a great match for the story material. Sure, this is basically continuity porn for the hardcore fans, but it does it in an entertaining fashion. Of course how this ties in to next year's actual 10th season remains to be seen. I can't imagine anything in this comic book being taken into account. (3/5) 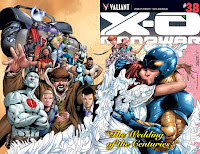 The wedding episode. It's always a recipe for disaster and unexpected hijinks, and I suppose that's what I was expecting. What I got was much more low-key, and arguably a lot more enjoyable: characters having conversations, romance filling the air, and a string of amiable humorous moments. There are some gorgeous pages of artwork here, courtesy of Sandoval and Tarragona, and some very striking panel layouts too. If you're not already a reader of X-O then this almost certainly is not the entry point for you, but for regulars it's a pleasant calm before the storm as the "Exodus" story arc kicks into gear next month. (4/5)
Posted by Grant at 7:58 PM