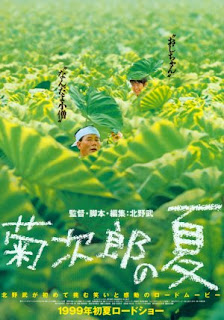 I'm pretty sure I haven't got around to reviewing a Takeshi Kitano film on this blog before, so it's probably worth giving him a quick explanation before reviewing his movie. Takeshi Kitano is an extremely famous figure in Japanese entertainment. He started off as a stand-up comedian, performing under the name Beat Takeshi. He segued into acting under the same name, and in a long career he has also worked as a singer, talk show host, writer, director, film editor, talent agent, poet, painter and videogame designer. He still hosts his own weekly TV show, and regularly makes guest appearances on others. Last year I spent eight days in Tokyo, and watching a small amount of broadcast television late at night in my hotel room, and even I managed to somehow tune in and see him muck about on live TV. Oh, and he's also a professor at the Tokyo University of the Arts.

Here's the thing: that's the Takeshi Kitano of Japan. In the rest of the world he has become noted and widely feted almost entirely for his feature film career. Since 1989 he has written and directed 17 features. His early films, including Violent Cop, Boiling Point and Sonatine, were all violent crime films involving the yakuza. This has earned him a reputation in the English speaking world for basically making yakuza movies. He has been involved in two English language productions: he wrote, directed and starred in Brother (2000), and he co-starred in Johnny Mnemonic (1995). In both cases he played a gangster.

With all of that in mind, Kitano's 1999 film Kikujiro must have come as quite a surprise.

It's pretty much his only non-yakuza film to gain extensive exposure outside of Japan, although subsequent films have generally received a small but appreciative cult audience. Kitano plays the title character: a selfish, rude, generally abrasive middle-aged man. Any money he puts in his pocket he immediately gambles away. He regularly attempts to scam people to get what he wants - and what he wants is always small, relatively petty things. The film kicks off when Kikujiro is put in charge of a child.

Masao (Yusuke Sekiguchi) is a young boy on the first day of the school holidays. He lives at home with his grandmother - his mother has lived away working since he was a baby, and he has never met her. With his friends all heading out of town on vacation, and after finding his mother's address on a letter, Masao decides to make the journey of several hundred kilometres to go see her. He meets Kikujiro and his wife within minutes of leaving home, and the wife sends Kikujiro off as the boy's guardian while making excuses with the grandmother. The film then follows their journey to and from Toyohashi in an episodic format.

It's a sensational journey, with a distinctive tone that makes it almost entirely like other films of this kind. For one thing Kikujiro really is a terrible person. He's rude, lazy and immature, and wholly unsuitable to care for a child. There's one critical scene midway through the film where he finds himself at a personal crossroads - able to make a change to how he lives his life and take responsibility - and visibly chooses to continue being a self-centred misanthrope.

For another, the film tells an unexpectedly depressing story. Masao's reunion with his mother is not what he expected, and certainly not what Kikujiro wanted. In one scene Kikujiro abandons Masao late at night to eat in a restaurant, only to emerge and find him almost taken by a paedophile. In another Kikujiro's fake gangster personality backfires spectacularly and ends in a thorough beating. What makes the film remarkable is that in the face of an awful lot of quite sombre, disturbing plot developments, it continues to be uproariously funny. The situations are often absurd, but they're presented in such a simple and matter-of-fact fashion that it's almost impossible not to smile. The film's final act, which involves Kikujiro and Masao camping out with two bikers and a travelling poet, is wonderfully heartwarming: basically four men entirely unsuited to raising children giving a child the holiday he deserves.

Kitano shoots the film in a highly traditional Japanese fashion, filling it with long, static visuals and ellipsis. He's particularly fond of cutting out action altogether, and instead presenting just the lead-up and the aftermath. His beating by the yakuza cuts from a calm conversation to him lying unconscious on the ground. One deliberately absurd fist-fight takes place in a prolonged static long shot and almost entirely behind a van. It may seem like an odd way to shoot a film, but it's a technique that helps develop much of the film's comedy.

Furthermore, Takeshi Kitano is such an oddly expressive actor. He always seems emotionless at first, with a craggy face that doesn't seem to move. His constantly narrowed eyes are like little black dots. His dialogue in all of his films is typically sparse. Then you begin to notice the little expressions. The purse of his lips. The rubbing of his nose. The sighs. Suddenly there's a whole world of performance behind his characters, always entertaining and remarkably subtle. He never gives himself much to work with in his own screenplays, but he works what he's given to perfection.

The film's gentle, bright score is composed by Joe Hisaishi, best known for his scores for Hayao Miyazaki's animated films. Kukijiro represents some of his best work.

This is a wonderful movie. It's so unusually sad, yet so ridiculously happy. It's a great example of why Kitano - the film's writer, lead actor, editor and director - is such a ridiculously talented guy.
Posted by Grant at 8:15 PM