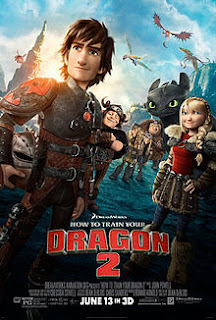 Generally speaking I am not hugely fond of DreamWorks Animation. I liked them at first, with their excellent cel-animated features The Prince of Egypt and The Road to El Dorado demonstrating some willingness to push beyond their Disney origins. Their hugely successful CGI-animated Shrek, however, seemed to overthrow that particular apple-cart, leading to a long-running series of bland, weakly designed films packed with celebrity voice casts and unnecessary pop culture references. Films like Bee Movie, Shark Tale, and The Croods seemed to be about the most boring animated films coming out of America in the past 20 years.

The one massive exception to this trend seemed to be Chris Sanders and De DeBlois' 2010 fantasy film How to Train Your Dragon. Here was a film with strong design, beautiful animation and a well-considered, very well-crafted storyline. It wasn't perfect - there never was a satisfactory explanation for why all of the adults in the film sounded Scottish and their children like Californian teenagers - but it really did stand out as something really special.

Last year DreamWorks released a sequel, because if nothing else sequels appears to be the company's raison d'être. I initially resisted watching it, since the risk seemed pretty high that the studio would ruin what made the original so effective. Thankfully they've avoided that risk, and presented an excellent film. It is not quite a solid as the original for a number of reasons, but does a fairly strong job of expanding the self-contained first film into an ongoing franchise.

How to Train Your Dragon 2 picks up a few years after the original film. The viking settlement of Berk lives in harmony with dragons. Hiccup has been spending recent times surveying the surrounding islands with his dragon companion Toothless - and it's that survey that brings him into contact with both his long-lost mother, a protector of dragons in her own right, and the warlord Dragon Bludvist.

I've seen more than a few people compare this film to the Star Wars sequel The Empire Strikes Back, and it's not an entirely inaccurate comparison to make. In both cases the sequel occurs on a larger stage, and has a much darker tone. This is a family film with a body count, and it doesn't pull its punches in showing the cost of violent conflict. Each of the returning characters show development and growth, although it does still grate how the two generations of Berk villagers have different accents. The new characters are slightly less well served: Game of Thrones star Kit Harington plays a fairly two-dimensional dragon hunter, while Djimon Hounsou is lucky to have one as the single-note and irredeemable villain Drago. Cate Blanchett fares better as Valka, Hiccup's long-absent mother, but it still feels that there's a lot more than could be done. Perhaps the sequel will develop her in the solid manner than the original cast got developed here.

Where the film excels is in its visuals: this is a remarkably beautiful film, with not only outstanding computer-generated effects but a generally beautiful aesthetic as well. The various dragons are wonderfully designed, and extremely varied, and the various mountains, crags, clouds and skies are all presented in the most glorious colours and compositions. This is easily the most beautiful film DreamWorks Animation has produced. I noticed legendary cinematographer Roger Deakins was credited as a 'visual consultant': his influence shows.

This is a great sequel: strong, dramatic, generally inventive and lovely to watch. A third film seems inevitable; indeed the end of this film leaves the door wide open.
Posted by Grant at 5:03 PM