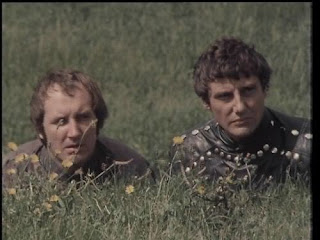 Avon and Vila teleport down to the planet Fosforon, where a Federation communications base holds a vital crystal needed to translate newly encrypted security transmissions. While they conspire with the base's corrupt commander, Blake is more concerned with a 700 year-old derelict spacecraft that's just entered Fosforon's orbit - and the possibility that there might be something alive inside.

Blake's 7 gets another new writer - its fourth - and thankfully it's of a much higher calibre than Allan Prior. Instead it's Robert Holmes, former Doctor Who script editor and one of the finest television script writers in the history of British television. He brings all of his talents to bear on the series, providing a well-constructed thriller that showcases one of the best combinations of characters the series will ever have.

Holmes had a couple of real loves when it came to script writing. One of them was dialogue: witty, well-crafted and perfectly suited to each character. In a series where the acerbic repartee between the leads is one of its strengths, bringing Holmes in to write an episode is a master-stroke. Another of Holmes' great loves was the double-act: two characters who could move through the episode together sparking dialogue off one another as they go. It's all over his Doctor Who scripts, whether it's Jago and Litefoot in "The Talons of Weng-Chiang" or Garron and Unstoffe in "The Ribos Operation", or even Dibber and Glitz in "The Trial of a Time Lord". Here he zeroes in on two of the series regulars - Avon and Vila - and finally sends them off on an episode together.

The relationship between Avon and Vila was already well formed by the time Holmes wrote "Killer", but it's never been so specifically highlighted. They work so well as a team, because despite any superficial dislikes each recognises the other has valuable skills that could keep the other alive. In this episode there's a deeper level of respect between the two than we've previously seen, and to an extent it foreshadows the strong focus the series will place on the pair during its third and particularly fourth season. Critically, Holmes doesn't write Vila as an idiot. A coward perhaps, but never stupid. The character works so much better in this fashion, giving him more depth and purpose than simply as comic relief.

While Avon and Vila negotiate with the untrustworthy Tynus (Ronald Lacey), Blake is busy trying to work out how a 700 year-old long-forgotten spacecraft managed to get so far out into the galaxy. He takes the risk of teleporting down to the base himself to investigate with the medical team leader Dr Bellfriar. This storyline, which runs in parallel to Avon and Vila's, sees the base come under attack from a terrifyingly fast and lethal alien virus. It's pretty much the single-most horrific storyline that the series has undertaken so far. As a series produced primarily for an adult audience, Blake's 7 can push the envelope a little further than Doctor Who did. Holmes is thus able to push this storyline to a logical extreme that would never have been possible with the Doctor and Sarah Jane. For late 1970s television it's remarkably confronting stuff.

Of course nothing's perfect. While providing the three male leads with plenty to do, Holmes effectively sidelines Jenna and Cally completely. Cally gets nothing to do other than operate a teleport under Avon's instruction and psychically sense an alien intelligence on the abandoned ship. Jenna gets ever less, basically a series of pouts and frowns whenever it looks like Blake is going to put his life at risk. There's an element of condescension about the way Blake treats Jenna here that's actually rather repugnant.

Then there's the costuming, which pushes the series to previously untapped heights of ridicule. Technicians dressed like cockroaches, quarantine officials dressed like Michelin Men, and firefighters dressed like hot water bottles. June Hudson clearly had a field day, but it does make quite a few scenes very difficult to take seriously.

Overall this is a great episode of Blake's 7. It remains one of my personal favourites. Seven episodes in, and this makes five good ones. The quality ratio rises to 71 per cent.
Posted by Grant at 10:15 AM