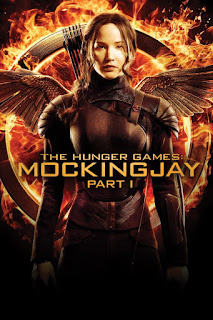 The Hunger Games was a great movie. It grabbed an immensely popular young adult novel and adapted it for the screen right at the height of its success. It cannily featured Jennifer Lawrence as its protagonist, Katniss Everdeen, at precisely the perfect moment to launch her already impressive career into super-stardom. It cleverly surrounded her with great supporting actors including Woody Harrelson, Elizabeth Banks, Wes Bentley and Donald Sutherland. Most importantly of all it told a great story: a little familiar to fans of Battle Royale, maybe, but distinctive and more than capable of standing on its own as a great science fiction film.

Its sequel, Catching Fire, committed one of the cardinal sins of sequels. There's a trick to a good sequel. You need to give the audience more of what they liked in the original work, but give it a fresh wrinkle or a new outlet. Too different to the original and you can alienate your existing fans. Too similar, and you get a film like Catching Fire: a faded photocopy of the original, repeating far too many of the same beats and showing an apparent lack of enthusiasm or imagination. Of course the films are adapting Suzanne Collins' novels, and to an extent are slaved to her writing, but between the book and the screen adaptation of it, I felt like something went missing.

Mockingjay Part I, the third part of the series, is thankfully a welcome return to form.

It's the sort of sequel I want to see more often: the same characters revisited, pushed into fresh directions and new extremes. It demonstrates a broad expansion of the original film's world, and expands Katniss' acts of rebellion into a demand for revolution. When you tell a story you generally aim to show the most important moment of a character's life. When you make a sequel you have to dig deep and find a more important moment. I think the film absolutely achieves that.

Jennifer Lawrence continues to do an outstanding job playing Katniss. It's a difficult character for an actor to grapple, not simply strong but simultaneously fragile and half-broken. All too often we see action and science fiction films with imperviously strong, wilful protagonists. I'm fascinated by Katniss, who is so visibly traumatised and damaged by her experiences yet continues to fight on anyway. It makes her a much more interesting character than the usual action hero; I'd pay real money to see some similarly realistic reactions to violence and carnage to what I see from Lawrence in some other genre films.

It's a more bittersweet experience to see Philip Seymour Hoffman as Plutarch Heavensbee, the rebellion's media mastermind. Hoffman was probably the best American actor of his generation, and seeing his performances now - so weirdly effortless and naturalistic - just makes me sad that he's not going to appear in any more films. He's another example of how well Lionsgate has been casting this series, as is his co-star Julianne Moore as Alma Coin, the President of the presumed-destroyed District 13.

If there's a flaw in the film it's that it only tells half of a story. It concludes at a natural break in the story, but still very much with a story half-told. I'll have to wait until I've seen Part II before deciding whether or not splitting the story into two films was the best choice. So far it feels like a better split that Harry Potter and the Deathly Hallows, which kickstarted the whole "two-part finale" trend in Hollywood. The film's final moments really hit me in the gut, and the Lorde song that accompanied the closing credits ("Yellow Flicker Beat") is pitch-perfect.

This film is an outstanding recovery after the middling second part. Fingers crossed that the final film in November can bring the story home. It has the potential to be sensational.