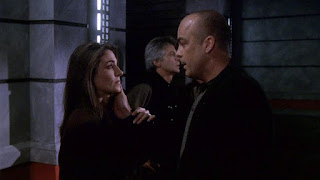 Garibaldi is on the receiving end of Sheridan's wrath, but finds himself a new employer. Ivanova is tasked with setting up the station's "Voice of the Resistance" broadcasts, but struggles to find sufficient power to send a signal all the way to Earth.

"Conflicts of Interest" is a reasonably enjoyable episode, although it does suffer somewhat from an excess of clichés and stereotypes. It focuses in the main on Michael Garibaldi (Jerry Doyle), in his new job as private investigator on the station. It also seems to be introducing further set-up for storylines down the way. Is it great television? No, but it is sufficiently entertaining television - and sometimes that's enough.

Garibaldi's shifty new contact Wade returns with the offer of a new job - smuggling someone onboard the station without security knowing about it. I have to admit I'm not sure how Wade, who thus far seems to have been mainly concerned with taking down Captain Sheridan, is suddenly involved in industrial espionage and pharmaceutical companies on Mars. Hopefully it will make more sense down the line, but this doesn't feel like a mystery so much as a weird right turn.

The individual with whom Garibaldi is tasked with smuggling in is ex-girlfriend Lise Hampton (Denise Gentile), last seen all the way back in Season 1. Her return, now married to a billionaire philanthropist, allows the episode to indulge in a sort of Casablanca-style reunion: two disparate souls, still in love, forced apart by circumstance. You can feel the nostalgia pouring from the keyboard to the actor's performances.

Lise is on the station to collect a valuable potential cure for a genetic virus about to wipe out all human telepaths. They're pursued by three rogue telepaths during the delivery, which appears to be setting up another new plot thread for the series to follow. So in all we've got: taking down the Earth Alliance, a civil war on Minbar, strange 'keepers' attached to people's necks on Mars and Centauri, the Drakh roaming border space killing people, Garibaldi going head to head with Sheridan in what I assume is a slow-boiling Manchurian Candidate fashion, and now some kind of viral threat to telepaths. I kind of hope they slow down with introducing plot threads, because that seems like more than enough to keep the remaining 10 episodes of the season going.

I am warming to Jeff Conaway's performance as new security chief Zack Allen. In previous seasons he felt a bit like a plot cypher, there to deliver relevant dialogue but lacking any real presence or personality of his own. With a more prominent role he's actually showing some depth. His awkward conversation with Garibaldi here, where he has to take Garibaldi's badge, communicator and gun, is very well played.

Ivanova's attempts to power her propaganda broadcadts take her to the great machine on Epsilon III, around with Babylon 5 orbits. This leads to a weird and entirely unnecessary conversation between her and Zathras (Tim Choate), identical twin brother to Zathras. It's impressive that their conversation is done entirely in one take, but there's simply no reason for the character to be there. It's as if Straczynski really like the character and was regretting sending him back 1,000 years into the past last season. It feels highly self-indulgent.

This is a very well shot episode, directed by David Eagle, with a lot of atmospheric lighting and darkened corners. A lot of Babylon 5 skirts the edge of being a little too ambitious and a little too cheap, so it's nice when an episode comes out that looks a little bit better than the standard.

As I mentioned right back at the start, this episode isn't great but it's sufficiently entertaining. It marks eight good episodes out of 12 so far, with a quality ratio of 67 per cent.
Posted by Grant at 7:04 PM