Babylon 5: "The Illusion of Truth" 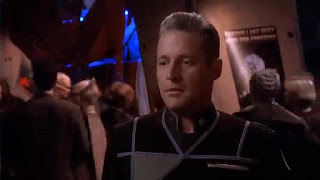 An ISN news crew returns to Babylon 5 to report on how the station has changed since it split away from the Earth Alliance. Sheridan grants the team access to the station as well as an interview - but will their report do anything to change the public perception back home?

Of course it will not because it's evident from the outset that Dan Randall (Jeff Griggs), the journalist doing the reporting, is just stitching up an anti-Babylon 5 propaganda piece for President Clarke. The episode is split into two halves. The first shows Randall and his team recording interviews and observing events across the station. The second shows what he has created: a carefully edited collection of shots designed to paint the station as an alien-controlled hellhole where humans live in poverty and the Minbari have plans to take over the human race via eugenics. It's tremendously tedious to watch, because for the most part you're simply drumming your fingers waiting for the inevitable.

It's not even particularly clever satire: it's blunt and gets hammered forcefully at the viewer in every scene. There's a bizarre segue into a news report about entertainment industry figures with anti-Clarke sentiments being arrested and charged with sedition. We see one man, who's been visibly tortured, naming other people. Straczynski even uses the names of actual black-listed writers from the McCarthy hearings, which seems more than a little tacky.

The episode does mark a fairly shocking betrayal of Sheridan's trust by Garibaldi, who is the only one who gives Randall something genuinely negative to report on regarding the captain. Whatever has happened to brainwash Garibaldi, he now seems to think the captain is a megalomaniac with a god complex.

This is simply a terrible episode: weakly conceived, poorly executed, and easily missed without a problem. It leaves Season 4 with five good episodes out of eight, and a quality ratio of 63 per cent.
Posted by Grant at 7:47 AM