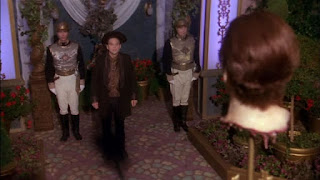 On Centauri Prime, newly appointed Prime Minister Londo Mollari (Peter Jurasik) has just hours left to force the Shadows off his planet before the Vorlons destroy everything. Meanwhile the Alliance fleet masses in orbit around Coriana 6 as both the Vorlon and Shadow fleets arrive. In a final showdown, Captain Sheridan leads the defence against the galaxy's most powerful enemies.

Wait, what? Final showdown? Let's back-track a little. When Babylon 5 launched back in 1993, it was promoted widely to science fiction fans as "a novel for television". Unlike the TV science fiction dominated by Star Trek, Babylon 5 would feature a pre-planned narrative with a beginning, middle, and end. It would build and develop, season over season, on what we had all been told was a five-year arc. Yet here we are, at episode 72 of 110, and the central storyline of Babylon 5 just wrapped up. That's it: the Shadow War ends. The Shadows and the Vorlons are written out of the series, and everybody gets to go home safely.

I complained when reviewing the last episode, "The Long Night", that elements of the plot felt terribly rushed. That now seems glacial by comparison. We're at the climactic point of a story that has taken us 72 episodes and almost 3,000 minutes to watch, and it essentially concludes with Sheridan shouting at two galactic super-powers as if they're naughty children. It all comes down to a surreal dream-like sequence, of course, because if there's one thing J. Michael Straczynski adores as a writer even more than a good monologue it's a surreal dream sequence. This one seems particularly tedious, with Delenn arguing with phantom versions of the Babylon 5 crew (actually the Shadows) and Sheridan arguing with a veiled woman frozen inside a block of ice (actually the Vorlons). It's all very trite, wobbly stuff to be honest, over-explaining a fairly simple conceit and rendering those 50-off hours of story down to the most rudimentary level.

So it's not simply a weirdly placed climax - it's a massively disappointing one as well. Only one episode ago the characters were facing planetary annihilation and mass destruction. This week it's all solved by basically telling the two most powerful civilizations in the galaxy to pull their heads in, stop acting like jerks, and go away. Oh and never mind about the billions of war dead they've caused in the process. When I originally viewed Babylon 5, this was the episode where I gave up. I had not been enamoured with the series up to that point, and when this particular rug was pulled out from underneath me I simply threw up my hands and walked away. From next episode my rewatching turns into watching: the rest of Season 4 and all of Season 5 are completely new to me.

There is an argument to be made that Babylon 5 is doing something very bold with this episode, giving it the opportunity to tell the kind of story that rarely gets told: the aftermath of the war, and the 'what happens next' of it all. The problem is that this kind of story rarely gets told for a good reason. It's comparatively boring, and by writing his war out this way Straczynski has put a huge amount of pressure on the remaining 38 episodes to be sufficiently interesting. It's the last 45 minutes of Peter Jackson's The Return of the King all over again, only this time it's going to take about 1,500 minutes to go Frodo on the damned boat.

Of course peppered in among the main storyline is some further development back on Centauri Prime. Londo wants the Shadow vessels off his planet before a Vorlon planet killer arrives. He also learns - rather conveniently, but let's move on - that it was Mr Morden and not the late Lord Refa who had his girlfriend murdered. Londo acts decisively: he blows up the entire island housing the Shadows, an act that involves sacrificing many Centuari citizens who remained behind, and he has Morden executed and his head impaled on a stake.

This leads to a fan favourite moment: way back in Season 2 Morden tried to tempt Vir with his standard question of 'What do you want?' Vir's answer, which was pretty well written and performed, was: 'I'd like to live just long enough to be there when they cut off your head and stick it on a pike as a warning to the next ten generations that some favors come with too high a price. I would look up into your lifeless eyes and wave, like this. Can you and your associates arrange that for me, Mr. Morden?'

Of course now we're at the point where Morden's severed head is stuck on a pike, and Vir does indeed give a cheeky little grin and gives it a wave, and it feels like the most horribly inappropriate moment of the season so far. Last episode Vir was inconsolable at having assassinated Cartagia. Millions of people are dead. He's spent the last few seasons in an increasingly awful emotional position, and giving a severed head a little smile and wave feels like exactly the opposite of what the character would do. It's a little joke for the fans, and certainly the bulk of them received it with enthusiasm, but for me it's always been yet another moment where Straczynski stopped writing three-dimensional characters and simply mugged for the camera through his script. It's terrible.

There's no mixture of good and bad elements here: this episode is pretty much all bad, and the fact that it's pretty much the most pivotal episode of the series makes it seem even worse. We're six episodes into the season, with four good episodes, so the quality ratio slips down to 67 per cent.
Posted by Grant at 11:37 AM