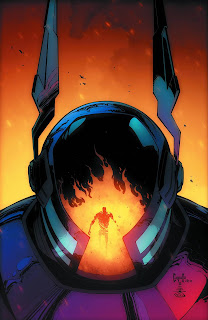 A lot of readers cried foul when DC revealed their plans for Batman this year: Bruce Wayne is out of the picture, the people of Gotham believe Batman is dead, and the GCPD has spared no expense in launching their own officially sanctioned Batman using a powered robot suit, an aerial deployment system, and former police commissioner Jim Gordon. I saw a lot of people claimed that the character was ruined, that the story was going to be stupid, and that they weren't going to buy the comic any more.

That's a real shame, because this current Batman story arc is pretty awesome. There's been a spate of random crime bosses displaying terrifying super-powers and then spontaneously dying. It all seems to be the work of someone called Mister Bloom - although whoever that is, he's staying out of sight. At the same time Jim Gordon is struggling to fit into his new role, his team are struggling to iron out the kinks, and elsewhere Bruce Wayne appears to be quietly starting a new life away from vigilantism and super-villains.

Yeah you read that right: Bruce Wayne's not dead. The comic hasn't even tried to pretend that he is: they showed him alive and well within about three pages of his apparent death back in April. This is basically what it was clearly going to be: a shake-up of the status quo for a few kind of story, and so far it's been great. Scott Snyder has nailed Gordon's personality and dialogue, and Greg Capullo and Danny Miki are clearly having a ball drawing the new robot Batman. This issue is just really good stuff, and it ends with a great cliffhanger. (5/5)

Under the cut: reviews of Doctor Who, Lando, Rebels and Saga.

The TARDIS has abandoned the Doctor, and he's trapped and alone in 4th century Rome. And I find it a little difficult to care all that much. This comic started off very strong, with great characterisation and an intriguing mystery. As it's dragged on I've slowly found myself less intrigued by the mystery, and less impressed by the writing, and now it just feels like a distended mess. The cliffhanger ending is also, no matter how it's resolved, remarkably stupid. There's one more issue to go in this opening story arc, and I think that may be it for me and this comic. There are better titles out there on which to spend my money. (2/5)

Marvel continue what seems to be a winning run of Star Wars comics with this new five-issue miniseries focused on Lando Calrissian. I'm not certain, but I think this might be Lando's first-ever solo comic book, and it suits him well. This story, set some indeterminate period prior to The Empire Strikes Back, sees Lando as a thief and con man, working the galaxy alongside his best friend Lobot (that bald dude in Empire with the computer head-set). Charles Soule has written an engaging first chapter with a great hook and spot-on dialogue. Alex Maleev has given it all a nice sketchy look. I'm sure that sooner or later we're going to hit saturation point with all of these Star Wars titles, but for now they've been pretty sensational. (5/5)

The American War of Independence cracks on, with Seth briefly meeting George Washington as part of his soldiering duties. This is a wonderful lower-class sort of a story: we're seeing the war that gets presented in all manner of books and films, but we're getting the soldier's-eye view of it: the generals and future Presidents are glimpsed briefly, and only ever from a soldier's perspective. Andrea Mutti's artwork is simply wonderful here: it's a difficult job, and he's doing an outstanding job of it - as is Jordie Bellaire on colouring. One of the things I particularly like about this book is how it's balancing its narrative. Last issue focused on Mercy, this issue on her husband Seth. I really hope this back-and-forth structure continues. (4/5)

The fifth arc of Saga comes to a conclusion that's in part quite predictable - it's become rather easy after 30 issues to anticipate the book's beats and jumps - and also immensely satisfying. Just because we can see the ending come, it doesn't mean that it's not satisfying to read. Events get tied up, new narratives are pushed forward, and there's the now familiar question of "what next?" for issue #31 when it drops in a few months. I wasn't in love with this arc at first, but certainly it was big jump back up in quality from arc #4, and it ended in a much more engaging fashion than it began. This book isn't quite at level at which it started, but it would be silly to claim it wasn't still one of the best comics on the market. (4/5)
Posted by Grant at 5:10 PM