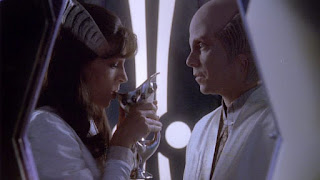 Delenn (Mira Furlan) is summoned back to Minbar to face judgement for her taking on human form and becoming engaged to John Sheridan (Bruce Boxleitner). Meanwhile Sheridan sends Marcus (Jason Carter) and Franklin (Richard Biggs) on a secret mission to the Mars colony.

In the name of all sanity, really? "Atonement" is primarily focused on Delenn undertaking a ritual judgement inside "the dreaming", a glowing white room full of mist where she enters a dream-like state and re-lives events from her own past. This means the episode spends most of its time in a series of dream sequences, something that Babylon 5 seems to do with an increasingly depressing regularity. Thankfully this particular dream sequence plays out more like flashbacks than as surreal conversations, but it does feel a lot like the dream sequence is the Babylon 5 equivalent of Star Trek: The Next Generation's holodeck: it keeps getting used, to the point where it's becoming tedious to watch.

So what do the dreams tell us? Quite a lot, and some of it came as a surprise. Firstly, Delenn was introduced to the Minbari's ruling Grey Council by her mentor Dukhat. When he died in the disastrous first encounter between the Minbari and the humans, it was Delenn whose vote decided upon waging war with humanity. Finally, we learn - as does Delenn - that she is a direct descendant of the legendary Minbari leader Valen. We know from Season 3 that Valen is actually former Babylon 5 commander Jeffrey Sinclair, which ties up a nice relationship between the two and feels like it's pulled a thread closed in the series. It's a genuinely nice revelation that I didn't see coming. It's great to see an episode focus so much on one of the alien cultures, with the station-based cast almost entirely relegated to bit part status.

Mira Furlan does a very good job with this episode, and Straczynski's script gives her plenty with which to work. Bill Mumy is also very strong as Lennier, her faithful aide. He's always been a slightly affected, odd sort of character, but there's something else building here: a sort of dedication to her that's bordering on a romantic obsession. It's a nice bit of writing and Mumy plays it well.

Less impressive is Dukhat, Delenn's former mentor. He's an overtly theatricalised character, who feels very out of place with all of the Minbari we've seen before. He also has a goatee which again looks weirdly out of place compared what we've seen. Reiner Schone over-acts terribly in the part as well, pretty much driving the final nail into the character's coffin. It's a pity, since his character is so critical to the story being told here, and he's really not that enjoyable to watch. It's also just plain weird, after Straczynski made a fairly big deal out of accusing Paramount of stealing from Babylon 5 to make Star Trek: Deep Space Nine, that he'd name a prominent character with a near identical one to Deep Space Nine's chief villain. I'm sure it was a coincidence, but it's a weird one.

The episode ends with a fairly worrisome revelation: Delenn's relationship with Sheridan will not cause a genetic impurity in the Minbari species, because the descendants of Valen - Delenn include - are already not pure Minbari. Her clan leader Callenn begs her not to reveal this fact to the Minbari people. We never find out what she's chosen to do.

Despite the use of dream sequences and a ropey guest performance, "Atonement" is a dramatic and entertaining episode. It leaves Season 4 with six good episodes out of nine, and a quality ratio of 67 per cent.
Posted by Grant at 8:07 PM