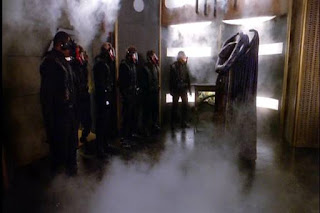 With the Vorlons launching an unprecedented attack on any planets influenced by the Shadows, Captain Sheridan has no option but to get the Vorlon Ambassador off Babylon 5. Over on Centauri Prime, Londo's horror at the insane Emperor Cartagia only grows when it becomes clear that the Emperor is not only aware their planet is about to be destroyed, but is welcoming of it.

You have to hand it to J. Michael Straczynski: when it comes to pretentious episode titles, he certainly has everybody else beaten. "Falling Toward Apotheosis" feels like a wonderful companion to previous titles including "Passing Through Gethsemane", "And the Rock Cried Out, No Hiding Place" and "The Geometry of Shadows". Do you know what the episode of Star Trek: Deep Space Nine was broadcast on the same day as "Falling Toward Apotheosis"? "The Ascent". I know back in the mid-1990s it was fashionable for Deep Space Nine and Babylon 5 fans to be quite combative over each other's shows, and I will say if the contest came down to elaborate episode titles then Babylon 5 won nearly every single time.

This episode has a great cold open, with Ivanova commandeering the on-station TV broadcasts to update people on which planets have just been destroyed by the Vorlons, and which neighbouring colonies are open to refugees. It's a brilliant way of showing the growing panic without actually showing the viewer a Vorlon fleet destroying an entire planet: things like that are better left to the imagination a tightly budgeted visual effect. Straight on top of that is a scene of panic in the station - a panic that is killed in a moment with the arrival of Captain Sheridan, now treated as a quasi-religious figure. I'm honestly not sure I buy that: I get that everybody is impressed that he returned from Z'ha'dum, but somehow Z'ha'dum has transitioned over the past two seasons from an obscure planet to which nobody paid attention into the most terrifying place in the galaxy that everybody has heard stories about for generations.

I'm also still not enamoured with the character of Lorien, who feels ridiculously convenient and trite. His saving Sheridan feels like a deus ex machina for the Season 3 cliffhanger, and his continued presence in the series isn't making him feel any more entertaining or welcome. The assassination of the Vorlon Ambassador, which should be a massive, climactic undertaking, stumbles quite badly in the execution: for every element that's brilliant there's another than doesn't quite deliver. It is, however, satisfying to finally see what a Vorlon actually looks like: basically a floating translucent space octopus.

After the Vorlon is killed, Sheridan admits to Delenn that, while Lorien's powers returned him to life, he only has 20 years left. This feels like a weird middle ground. It's good that he didn't just magically get to return to life without any personal cost at all, but 20 years still feels like an awfully long time. It would have been better to give him a much shorter life-span. How much more dramatic to have the leader of the war against the Shadows and the Vorlons honestly not know if he's going to survive to the end of that war? It's a missed opportunity, and that comes on top of the mild frustration that once again the series has basically cribbed its plot from The Lord of the Rings.

Over on Centauri Prime, Emperor Cartagia continues to reveal in greater and greater detail just how far his mind has come undone. Now it's revealed that he knows that having a Shadow colony on his planet will lead to its destruction, but he's actually happy about it because the Shadows have assured him he will ascend to godhood once his planet is incinerated. It's been a genuinely good series of episodes for this plotline, but I'm still struggling to like Wortham Krimmer's performance. He's playing it just a little too broadly, as if Cartagia is living inside an American situation comedy while his co-stars play drama. I'm also finding the ongoing presence of Mr Morden (Ed Wasser) a little tedious: far better to have simply let him die in Season 3 than bring him back as this scarred and hooded figure. For one thing the make-up job on Ed Wasser is dreadful.

As with the previous episode, I have a lot of issues with this episode, but overall the narrative is still driving forward so aggressively that it's hard not to get picked up in it. It certainly could have been much, much better, but it's entertaining and fast-paced, and certainly a lot better than some of the episodes produced in earlier seasons. Four episodes in and Season 4 is still running at 100 per cent.
Posted by Grant at 7:23 AM