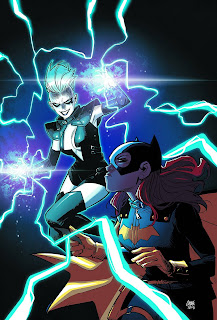 Barbara Gordon seems to be in a little bit of a quandary at present. Her father, former police commissioner Jim Gordon, has confided in her that he's the new Batman, but she - for complicated and angst-ridden plot reasons - has not confided in him that she's Batgirl. As a result encounters between the two are more than a little fraught, including in the new issue #42, where Batman has orders to arrest Batgirl on sight - but needs her help at the same time. Awkward.

Of course given that Barbara only wears a mask over half of her head, and her own father can see her eyes, mouth, chin and hair, not to mention hear her voice, and the idea that he's the new "world's greatest detective" seems a little farcical. Unless of course he knows, and isn't letting on to make his daughter feel special. Actually I like that as an explanation. It's rather sweet.

Batgirl #42 is a fast, densely packed little story in which Batgirl and Batman team up to take down Livewire, while the various supporting characters in Barbara's civilian life all move on and develop in interesting little ways. It's a great issue. This is just generally a great comic. (5/5)

Under the cut: reviews of Black Widow, Copperhead, and Daredevil.

Props to Nathan Edmondson for getting his Black Widow comic roped into Marvel's Secret Wars crossover, and managing to restrict its influence to maybe half a page out of 20. The bulk of this issue finishes telling the story of one of Natasha Romanov's first key missions for the Soviet Union, which showcases not only how far she's come as a character but also reflects on actions she's taken over the past 20 issues of the comic. It's a beautiful close to what has been an exceptional 20 issue series. I honestly don't think there's been a better written or better illustrated Black Widow comic in the history of the character. Hopefully whatever Edmondson and Noto do next it will be together: they're a fabulous team. (5/5)

One of the joys of Copperhead is seeing how Jay Faerber gleefully repurposes and remixes all of the tropes and archetypes of the western genre. In this issue the sheriff pulls together a posse to ride out and rescue the town's deputy from bandits. Standard western fare: except the sheriff's a woman, the deputy's a hair dog-like alien, they're riding big lizards and the posse includes a green one-eyed kid and a trio of genetically engineered super-soldiers. Strong story, likeable characters, knowing pastiche, great artwork, and really soft, subtle colours that really work the material well. Great stuff. (4/5)

Things get very heated and critical in what I assume is the penultimate issue of Mark Waid's astounding run on Daredevil. Matt Murdock is simultaneously facing off against three villains, with the lives of both his best friend and his girlfriend at the mercy of the Kingpin. One of the key elements of Daredevil has been misery: put simply, Matt's a pretty messed up guy, and bad things happen to him all the time. It feels fitting that as this long, exceptional arc reaches its climax, it seems almost inevitable that tragedy is about to strike Matt once again. I can't wait for the next issue. (4/5)
Posted by Grant at 7:40 AM