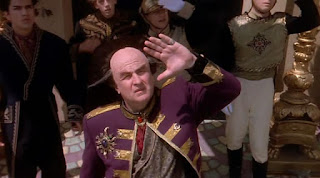 Captain Sheridan is missing, presumed dead, after travelling to Z'ha'dum and destroying the Shadows' largest city with two nuclear bombs. Commander Garibaldi is also missing, sending G'Kar on a mission to find him. With the Shadows temporarily in retreat, the assembled civilizations of the galaxy are abandoning Babylon 5 to shore up their own defences back home. Londo Mollari commences his new position in the court of the Centauri Emperor Cartagia - only to discover the situation is far worse than he could possibly have imagined.

The Season 3 finale of Babylon 5 threw a lot of game pieces up into the air. "The Hour of the Wolf" is, in effect, about that terrifying moment of suspension before they all fall crashing back onto the board. We don't learn what happened to Garibaldi. We don't learn what happened to Sheridan - although he does appear to be alive. The Shadow War appears to be momentarily on hold, with every party taking the chance to just breathe deeply and wait for the next round.

That doesn't necessarily sound like a recipe for great television, but it's actually very clever writing on the part of series creator J. Michael Straczynski. It re-centres the show. It reminds us of who the characters are, what they want, what's standing in their way, and whatever's likely to happen to them next. It allows new viewers a fighting chance of actually catching up with the story.

It's a great episode for Claudia Christian as Susan Ivanova, the last person standing among the three senior-most positions on Babylon 5. Sheridan's apparently dead, Garibaldi is missing in action, and without her colleagues to rely on she's left sitting awake at night for days on end trying to work out what to do next. I have not been particularly fond of either the writing or the performance of Ivanova in the past, but credit where it's due: both writing and acting are very effective here.

While events on the station take an emotional pause, the story is working overtime on Centauri Prime. Londo (Peter Jurasik) finally has what he has always wanted: real power on the homeworld in the Emperor's court. Once there, however, he discovers the Emperor Cartagia (a slightly over-the-top Wortham Krimmer) is mentally unhinged. Cartagia has any dissenters executed. He holds late night conversations with a table stacked with severed heads. He has granted the retreating Shadows a free base on an island close to the capital because they have promised him ascendance to godhood. While seeing the fleet of Shadow vessels sail over the emperor's palace, another piece of Londo's future vision has become true. Now all that's left is to assassinate the Emperor before it's too late.

It's an outstanding plot progression, handing Londo his dreams on a plate only to reveal that it's actually a nightmare. He even finds himself trapped working once again for the mysterious Morden - now horribly scarred after Sheridan's explosive visit to Z'ha'dum. Throughout the series Londo has been one of its most interesting characters: essentially a good man who keeps making bad choices. Now, with everything to lose - success, power, wealth, and his life - he has to finally make the proper choices he should have made three years ago. If you wanted to point to the very best Babylon 5 had to offer, you'd point at Londo Mollari.

It's a very strong start to the season: intelligent, thoughtful, and cleverly paced.
Posted by Grant at 8:45 AM