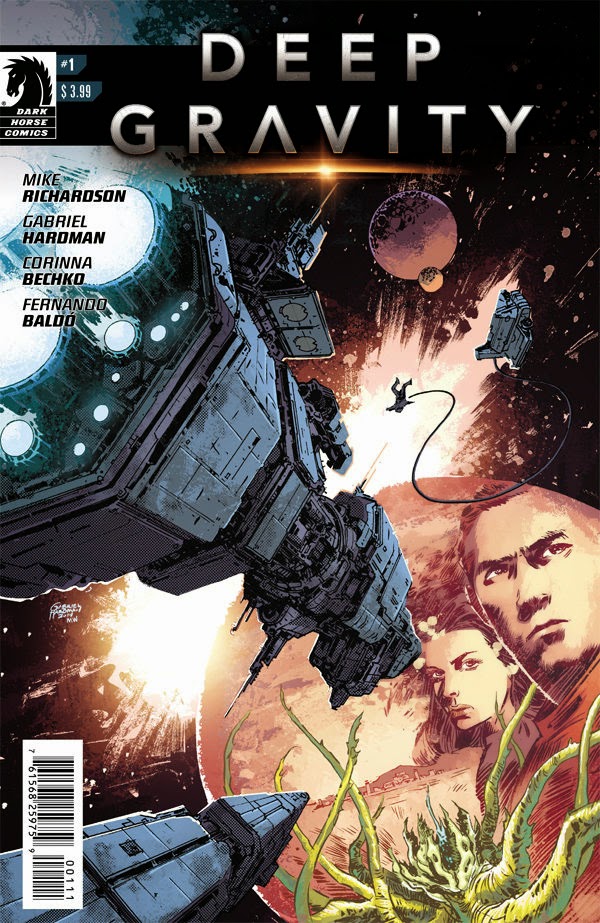 With the loss of the Star Wars license Dark Horse has a massive hole to fill in both its publication schedule and its revenue stream. About a third of the individual units shipped by Dark Horse each month are based on Star Wars, so the loss of the franchise to Marvel is going to hurt the company very badly. There are clearly plans in place to compensate, however, including a reboot of their once highly successful Alien/Predator line (now including Prometheus as well), tie-ins to sci-fi videogames properties like Halo and Mass Effect and, I think most interestingly, all new original space opera comics like Deep Gravity.

Deep Gravity is a four-issue miniseries from the creative team of Corrino Bechko and Gabriel Hardman, who have spent the last 18 months creating Star Wars: Legacy. They have done pretty decent work on that book, and so I was keen to see how they'd go unshackled by the demands of film continuity and corporate governance.

It's a promising first issue, but as a first issue it's almost entirely set-up. Humans have colonised a distant planet named Poseidon. It takes three years to get there, and once there the average human can only safely survive for another three years before the higher gravity and background radiation take them out. An engineer named Steven Paxon has taken the journey there, not because he wants to see another world or make a truckload of money, but because his ex-girlfriend left him to go there and he wants to ask her why they broke up.

This is the first big problem with Deep Gravity - it asks me to follow a protagonist who has engaged in the most ridiculously excessive stalking behaviour possible. Thankfully his ex, Michelle, seems a lot more level-headed and likeable than he is, although I'm genuinely surprised she didn't head straight for the local authorities and file charges.

Once Paxon helps load a ship full of alien wildlife, and has spoken with Michelle, he gets ready to leave Poseidon again. That's correct: he travelled three years to have a conversation with his ex, and now he's travelling three years back to Earth. Ridiculous. Obviously things go wrong on the ship, and here's where the remaining issues seem likely to play out, but I really did feel that a promising first issue got totally derailed by this stalking thing. It's a pity, because the comic is otherwise a lot of fun. (3/5)

So a little while back there was an issue of Aquaman where Arthur and Wonder Woman teamed up to fight the Greek demigod Hercules, and that issue finished with quite a bit of plot left hanging over and never really got resolved. It gets resolved here, in an extra-length special issue - still written by Jeff Parker, but illustrated by three teams of artists whose styles thankfully manage to gel together reasonably well. It's all marvellously entertaining - Aquaman and Wonder Woman aren't a very common pairing, and they actually match each other remarkably well. This is a broadly entertaining action comic: plenty of fighting, plenty of colour and dynamic art. (4/5)

This issue provides a handy flashback to explain who the hell the villain, Deacon Blackfire, actually is. He's from the 1998 miniseries Batman: The Cult, and as far as I'm aware hasn't been seen since - so you can be forgiven for straining to remember who the hell he is. I certainly was. Despite the backstory, there isn't a huge amount to this issue. Batwing and Jim Corrigan are still trapped in the tunnels underneath Arkham, while Red Robin and Harper Row finally meet the crazy scientist they went looking for in Tokyo. (Seriously, really crazy: 'What's her name?' he keeps asking Robin, even after he's called Harper 'Harper' in front of him about four times. Speaking of which, why is Tim being such a dick and giving out Harper's real name when she's wearing a mask? Very poor form.) (2/5)

Rick Remender is back with the first of two SF comics this week (see Low below), and it's an absolute thrill to return to Black Science. This is an action-packed, highly imaginative comic book about a group of people tossed rapidly from one alternative dimension to the next thanks to an experiment gone horribly wrong. Don't think this is one of those alternate dimension stories where the heroes wind up in 'where the Nazis won World War II' world or 'women are in charge' world. This is more like 'demonic fish people' world and 'floating alien city' world. Matteo Scalera is one of the best artists in American comics today, so the book is also stunningly beautiful to look at as well. If you read sci-fi comics but don't read Black Science, you've probably made a mistake at some point. (5/5)

While the Aquaman annual ties up loose ends, the Detective Comics annual acts as a side-story to the current "Icarus" storyline running through the monthly book. It's actually a rather neat idea, giving hardcore readers some additional context but not spoiling the narrative flow for those only reading the main book. It also works independently of "Icarus": if you've been following it, you'll get extra value, but if you just want to read a self-contained issue cold, it works that was too. I'm not entirely convinced by the artwork: firstly it's not outstanding to begin with, secondly the two style really do not match each other at all. This patchwork aesthetic ultimately harms the rest of the book. (3/5)

"The Russia Shift" concludes with a police siege, revelations of character arcs, an explanation of the story's title (which is great) and some very intriguing hooks for future storylines. This is a perfect blend of police procedural and science fiction drama, set on a space station orbiting the Earth. It takes the best elements of its two genres: the procedural elements follow well-worn but entertaining trails, while the sci-fi elements embellish and wrinkle the standard tropes to make it all feel a bit different. If you're reading sci-fi comics but aren't reading The Fuse either, you've probably made two mistakes. (5/5)

Not content with writing Black Science, Rick Remender now adds another monthly SF series to his schedule. This one's a far future story, where humanity hides in isolated cities deep beneath the ocean, while the sun's solar radiation slowly bakes the surface. It's funny that, in a week that includes issues of Black Science and The Wake, that Low should come along and feel a lot like a mixture of the two. It's got the ocean setting, violent raiders and undersea monsters of The Wake, and the tight family unit - parents and children - of Black Science. It's all rather harrowing stuff, and certainly the brighter, more optimistic tone of the issue's first half puts one off guard when the nasty actual plot of the series kicks in. There's worldbuilding aplenty, and stunning artwork by Greg Tocchini, but this book almost feels too nasty to like. (3/5)

When you've got a comic about a post-apocalyptic Earth, and recent issues have pointed to an even greater disaster looming on the horizon, and your new issue says on the cover that it's part one of a six-part story titled "Ragnarok"... it's probably time to start panicking. Callum Israel and the crew of the Kapital are back, definitely worse for wear, and tracking a systematic increase in freak weather conditions that mirror the crash that almost wiped out the human race. This feels like it could be the climax of the whole series, or at the very least the start of a new chapter. It's well written, nicely illustrated by series regular Garry Brown, and is packed full of foreboding and ominous melancholy. I'm actually slightly nervous reading it. (4/5)

I was disappointed by this issue, which wraps up Matt Kindt's four-issue miniseries, but I think my disappointed stems from false expectations than anything specifically wrong with this issue. The title, "Rebel Heist", suggested some clever Ocean's 11-style scam. While that's true to an extent, there really isn't any clever game-changing twist to be found here, and I was desperately hoping for one. Instead we get a solid but unexceptional issue that brings Luke Skywalker into the fold (previous issues focused on Leia, Han and Chewbacca), wraps up the plot and ties it into events of film continuity. This miniseries certainly weakened as it went on, but all up it's a pretty entertaining story with decent art by Castiello and Parsons. (3/5)

Everyone knows the number one rule of storytelling: show, don't tell. Sadly Scott Snyder appears to have had a weird lapse of memory, because despite usually being one of the best writers in comics today he's filled The Wake's final issue with a huge amount of telling. Way too much telling. Sean Murphy illustrates it nicely, but this is less of a climax and more of an overwhelming information dump. It's all rather frustrating - the first half of this series was a great SF horror pastiche, and the second half was a far-future post-apocalyptic story that failed to really gel together. This issue fails to successfully tie the two halves together, and feels like a bit of a broken promise. The ideas are fine - the expression of those ideas is sorely lacking. (2/5)

Winner of the Week: Black Science. I'm glad it's back.

Loser of the Week: The Wake. Seriously, show don't tell.
Posted by Grant at 9:51 AM