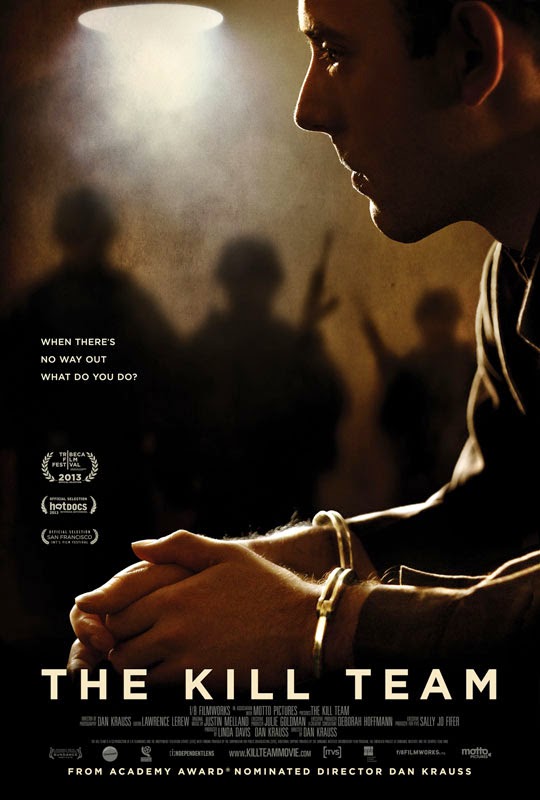 In 2010 a United States army unit in Afghanistan, starved of actual Taliban insurgents to fight, took to murdering civilians - carefully placing weapons on their victims to cover their tracks. The circumstances of this horriying series of acts is paired with the military trial of one of its participants in The Kill Team, a feature documentary directed by Dan Krauss.

The film is centred on Adam Winfield, an idealistic young private who witnessed the growing atrocities, vacillated over how to alert his superiors and ultimately found himself joining in. It's his story, and that of his understandably shattered parents, that forms the core of this provocative and often harrowing film.

It's one of those films that I found exceptionally good, and rivetting viewing, yet left me emotionally ruined by its conclusion. There's no levity to this film. There's no happy ending. There's only the dead and the incarcerated.

I vaguely knew the details of the case around which The Kill Team focuses, and how in 2010 a US Army unit stationed in southern Kandahar were charged with the murder of three Afghan civilians. It's profoundly unsettling to hear about the crimes from the perpetrators, each of them justifying their actions and calmly relating how they went about murdering innocent people and planting weapons on their corpses. The film raises some very pertinent questions about the nature of war, and what soldiers are trained to do - something went horribly wrong with the 3rd platoon of Bravo Company, and one wonders what happened in the chain of command to enable this kind of psychopathic behaviour to be undertaken for so long without being uncovered.

Private Winfield makes for an initially sympathetic and somewhat tragic figure: he wanted no part of the murders, and when it became clear he was unhappy his own Sergeant - the ringleader of the murders - started threatening him with murderous reprisals if he dared speak up. This documentary could easily side with Winfield - indeed early on it's very easy for the viewer to do so - but the further the story develops, the more ambivalent the film becomes. While some of the soldiers interviewed are clearly guilty of horrendous crimes, in Winfield's case it's hard to pin down where his being a victim ends and where his becoming an accomplice begins. Dan Krauss' camera is masterfully handled, concentrating on small visual detail as much as his subjects' faces and testimony.

I particularly appreciated the joint focus on Winfield's parents, for whom I felt nothing but deep sympathy. Krauss manages to express the toll these events take on family as well as the individuals involved, and he does so in a very measured and unsentimental way.

This is a difficult film, and a very upsetting one, but it's also an immensely valuable film. I cannot recommend it enough.
Posted by Grant at 9:39 AM