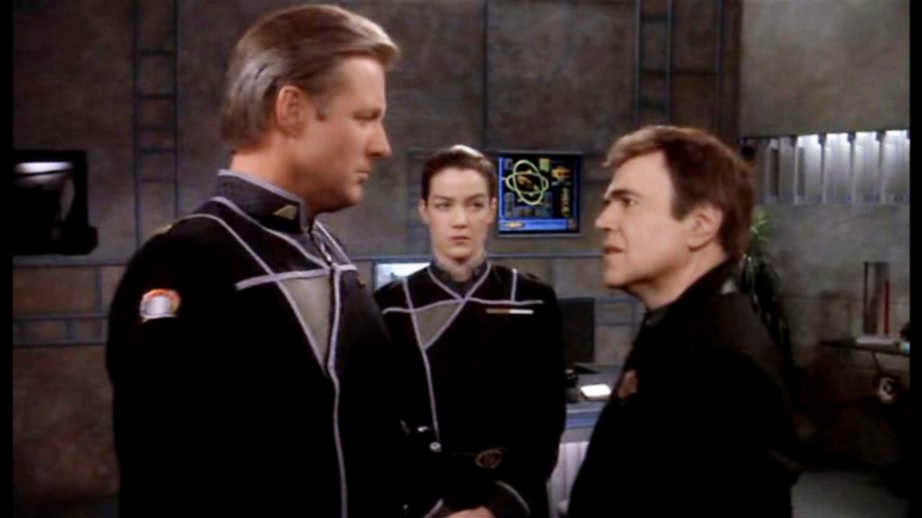 Jumping back to Babylon 5 after about 70 episodes in a row of Star Trek: The Next Generation and Deep Space Nine gives you a real feeling of creative whiplash. I'm not saying that one franchise is brilliant and the other awful, but it has made it profoundly clear where Babylon 5's strengths and weaknesses actually are. It gets the big things brilliantly right, because it's the self-described "novel for television", and characters are able to change, develop or even die. This allows writer/producer J., Michael Straczynski numerous opportunities to showcase big changes, great speeches and beautifully composed one-on-one dialogues between characters.

Take "Ship of Tears". The time has come for G'Kar to be admitted into Sheridan's secret war council, and that means Delenn has to confess to him that she and others knew all about the Shadows and their covert support of the Centauri invasion of Narn. Millions have died in unknowing sacrifice to keep Delenn and Sheridan's plans a secret. It's a heartbreaking scene, played beautifully by Mira Furlan and Andreas Katsulas, and it's only possible because G'Kar in particular has changed so much since the series began.

That's the sort of thing at which Babylon 5 excels. Everything in between is kind of where the series falls down. Everyday plot developments - the sort of "A to B to C" of narrative storytelling - are generally quite generic, with Stracyznski slipping very easily into cliches and stereotypes when he isn't paying attention. With a stronger cast the series might overcome these problems, but in truth the cast generally aren't distinctively talented. Attempts at humour, more often than not, fall awkwardly on their faces. Individual lines of dialogue don't scan smoothly: it's as if it's really obvious that it isn't people having conversations, but fictional characters sharing dialogue. Ordinary people simply don't talk how Sheridan, Garibaldi and Ivanova talk. Now I have met people that do talk that way: science fiction fans.

Hardcore SF enthusiasts - the sort that will join fan clubs, attend conventions or, let's be honest, write daily blogs reviewing 20 years sci-fi TV episodes - have a peculiar way of speaking. For one thing we tend to read a lot of books, and that gives us fairly large vocabularies. We're often socially awkward, or were bullied in school, and we compensate by sticking together in a pretty tight community. We have our own jargon, and in-jokes, and to be honest our own manner of speaking in general. There's a cadence to the way fans talk to each other that's difficult for me describe, but I recognise it when I hear it and I recognise it in Babylon 5.

My point in describing all of this is not to criticise how fans speak. I am a science fiction fan, after all. What I'm simply trying to explain is that there's a way of talking that I only hear when I'm at a science fiction convention or a fan gathering, and it's that way of talking that I keep hearing in Babylon 5. It makes sense, after all: J. Michael Straczynski is himself a fan. It's led me to wonder if this is why the series was so popular with the hardcore yet struggled to develop a mainstream following like Doctor Who or Star Trek did. It's not simply a sci-fi drama that fans happened to latch onto: it's the only one made specifically for us.

The clues are all over "Ship of Tears". In one early scene Psicop Alfred Bester (played by Star Trek's Walter Koenig and named after a noted science fiction author) describes non-telepaths as "mundanes", which is a notorious old bit of fan jargon used to describe non-fans. Suddenly the popularity of Babylon 5 among the hardcore seemed absolutely clear, and my constant irritation at the series' dialogue became equally clear. There's so much good in this series, mainly in its most ambitious moments, but it keeps tripping over its own feet on the small stuff. Or, at least, it does with me: I wonder if many fans enjoyed the series so much because there was finally a TV series where the characters talked their language.

On the other hand I may be talking complete bollocks about the characters talking like fans; I'd be genuinely interested to know what other people think.

Dialogue quirks aside, this is an excellent episode that provocatively pushes the overall narrative forward while providing a great new perspective on Bester. Importantly, it ties two major elements of the series - the Shadow War and the Psi Corps - together, so that all of the development of the latter in the first two-and-a-half years now increases the importance of the former. This is the 10th good episode this season out of 14, giving Season 3 a current quality ratio of 71%. I'm often one of this series' harshest critics, but even I have to admit Straczynski was writing some pretty awesome stuff in this season.
Posted by Grant at 7:28 AM