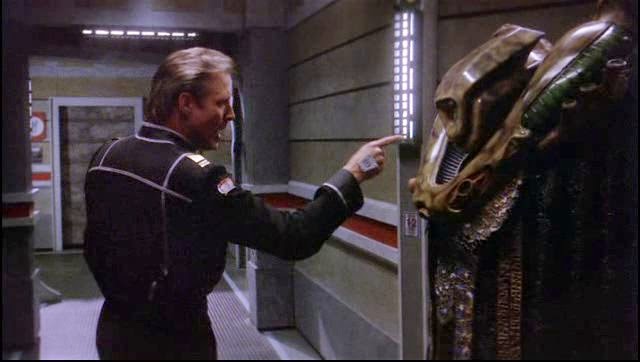 Londo Mollari encounters the elusive Mr Morden once again. The Shadows begin large-scale assaults on the non-aligned worlds. Sheridan challenges Ambassador Kosh to step up and force the Vorlons to enter the conflict. Garibaldi confronts Franklin about his stim abuse.

What's weird about "Interludes and Examinations" is that there is a huge amount of really significant stuff going on - plot developments, character revelations, the outbreak of full-blown galactic war, and two character deaths - yet the whole piece feels bizarrely inert. It's like watching someone moving chess pieces: there's a game going on, and it's possibly a quite intriguing one, but it's not a game we're being allowed to play. It lacks the emotion that made "Ship of Tears" so enjoyable, and in a few places feels actively stereotypical.

Londo's narrative feels less important than it should. This is really the first serious attention the character has received in four episodes, and it comes across more like a catch-up than a significant change. I say this despise his lover being murdered and him vengefully re-teaming with Morden to destroy his rival Lord Refa. Peter Jurasik's performance seems curiously sub-par as well, particularly given the standout work done in the last episode by Andreas Katsulas.

The sudden breakout of open hostility by the Shadows should be a momentous and terrifying occasion, but it's represented here by squabbling alien diplomats and people handing around intelligent briefings in a room. The war should be a phenomenally significant moment, but instead it just sort of drifts by. Likewise Sheridan challenging Ambassador Kosh to take charge and actually help for a change lacks its intended impact. Kosh's subsequent murder by a trio of Shadows in his quarters is probably the episode's strongest scene - he says goodbye to Sheridan in Sheridan's dreams as it happens - but again it has less impact that I was expecting.

The entire storyline of Franklin's growing stim addiction has been a little mortifying to watch. It's had all the hallmarks of "a very special Blossom" without any originality, drive or believability. There's not a single line of dialogue that comes out of anybody's mouth that doesn't sound like a rank cliche. Match that with Richard Biggs' limited performance and you've got a recipe for disaster.

So: stuff happens, allegiances shift, people change, people die. I found myself curiously unmoved. This was not a good episode, leaving Season 3 with 10 good episodes out of 15: a quality ratio of 67%.
Posted by Grant at 9:04 PM