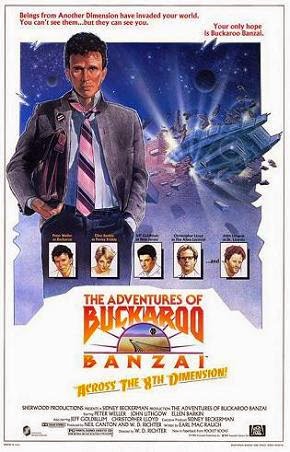 No matter where you go, there you are. And no matter where you go, if you've ever seen W.D. Richter's 1984 film The Adventures of Buckaroo Banzai Across the 8th Dimension you're unlikely to ever forget it. I think this film ranks alongside the likes of The Blues Brothers and The Rocky Horror Picture Show as one of the ultimate cult movies ever made. Sadly the world doesn't completely agree with me, because while there continue to be regular cinema screenings of the other two films you never see Buckaroo Banzai getting big-screen revivals with attendees dressed as Emilio Lizardo or Sidney "New Jersey" Zweibel. You should. We deserve it. It would be awesome.

There are a lot of reasons why Buckaroo Banzai deserves to be a cult favourite. For one thing it sits at a weird genre crossroads: it's a science fiction film, but it's also a comedy - both generally funny and satirical - and a romance too. It has a peculiar tone to it, as if you're not always sure if the filmmakers are in on their own joke or not. It has an extensive cast of actors both famous and with significant cult appeal: Peter Weller, Jeff Goldblum, Ellen Barkin, John Lithgow, Clancy Brown, Christopher Lloyd, Dan Hedaya, Vincent Schiavelli, Carl Lumbly and Ronald Lacey. It is also eminently quotable.

Today it manages to also be a curious historical artefact. Back in 1984 it was pretty contemporary and forward-thinking. In 2014 it's almost unbearably mid-1980s, dated so precisely that it manages to generate even more charm than it already had. I like films that date. Films should date. We can look back on Buckaroo Banzai and marvel at it: they really made a film that weird back in 1984? 20th Century Fox agreed to distribute it? It was actually released in cinemas?

Of course the film was completely wiped out when released in cinemas. 1984 was a very competitive year, and faced with the likes of Indiana Jones and the Last Crusade, Ghostbusters, Gremlins and Star Trek III, Buckaroo Banzai folded like a cheap deck of cards. It's almost unbearably cocky closing caption, advertising the forthcoming sequel Buckaroo Banzai Against the World Crime League, went unfulfilled.

Buckaroo Banzai is not a great movie, although it's a very good one. It's also a highly distinctive film. There simply isn't another movie quite like it, before or since. And, 30 years on, it still deserves to be noted and celebrated. And quoted, annoyingly, at non-fans who simply don't get the reference.
Posted by Grant at 10:57 PM