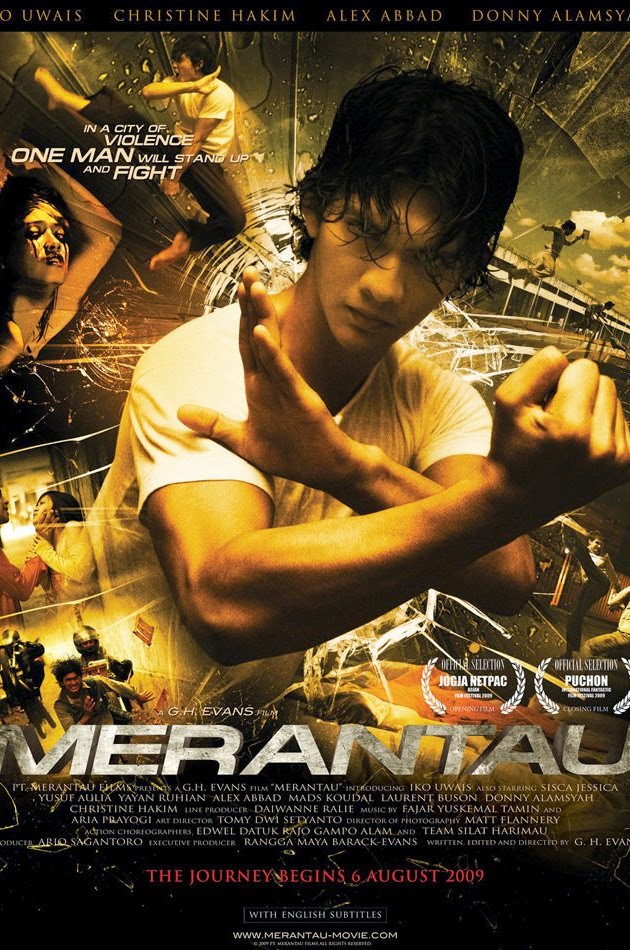 Welsh director Gareth Evans has pretty much established himself as one of the top ten names in contemporary action cinema, thanks in the main to his exceptional Indonesian film The Raid (reviewed here) and its sequel. This wasn't his first foray into Indonesian action flicks, however: that was his 2009 film Merentau.

When I started watching Merantau a few years back, I made the prediction that it would be a breezy and entertaining action film about a slightly idealistic and noble young martial artist who leaves his small rural life for the big city – where he would immediately rescue an attractive young woman from violent drug dealers. It turns out there are no drug dealers in Merantau. Instead they are human traffickers. Asides from that I was straight on the money.

With movies such as Merantau (and Thai stablemates Ong Bak and Born to Fight before it), it almost seems inappropriate to review them on a level playing field with other movies. They don’t have large budgets. They are not exceptionally well written. The actors are generally selected first and foremost because they are skilled martial artists, and any performance skills are simply an added bonus. They are effectively movies in the style of World Wrestling Entertainment: showcases of human athleticism, filled with heroes you want to cheer and villains you’re encouraged to boo. When done properly, these sorts of action films are marvellous entertainment. When done badly, they’re tedious in the extreme. Thankfully, Merantau is one of the good ones.

Its appeal is due in no small part to its lead, Iko Uwais, who makes his feature film debut here as Yuda. Uwais performs a particular style of silat, an Indonesian martial art that appears to be based on rolling, weaving and breaking henchmen’s arms. Don’t take my word for that – I’m hardly a martial arts expert. What I know I know from watching Jackie Chan, Jet Li and Tony Jaa. The different fighting style gives the film a badly needed sense of novelty, since there isn’t much originality to the plot. Uwais is a wonderfully charismatic actor, with a strongly screen presence, and this helps drag the viewer into the narrative. If there is any justice in the world, he's going to make as big an impact as Tony Jaa (Ong Bak). Certainly his subsequent performances in The Raid movies points him firmly in that direction. Similarly good is Sisca Jessica as Astri, the aforementioned attractive young woman that Yuda steps in to rescue.

The film has a nice clean look. Like all good martial arts films the camera stays far enough away from the performers to showcase their fighting moves, and the editing and photography work to give a strong sense of geography. While a lot of the film is shot using handheld cameras, the “shakycam” visuals that dog Hollywood action cinema are nowhere to be found here.

There’s a phrase that occurs when watching movies such as Merantau, which is this: ‘expect what you get, and you’ll get what you expect’. This is not a film for surprises. This is not a film for originality, and certainly not for subtlety. If you’re after a film full of impressive martial arts displays, lengthy stunt and fight sequences, appealing fresh-faced leads and an easy-to-follow plot, Merantau should be right up your alley.
Posted by Grant at 5:18 PM