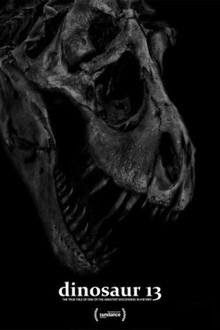 Bear with me on this. A few years ago I was playing a board game with a group of friends. Another friend pops in a little late, and asks what we're up to. 'We're playing this fantastic board game,' I tell him. 'It's called Agricola. It's about late medieval farming practice. It's great!'

'It would have to be great,' replies the friend, 'you're playing a board game about late medieval farming practice.'

That conversation came to mind while watching Dinosaur 13, an American documentary directed by Todd Douglas Miller. It's about a complicated legal dispute arising from the excavation of a near-intact fossilized Tyrannosaurus Rex skeleton in South Dakota. It's great, and going in I knew it was going to be great, because why else would the Melbourne International Film Festival program a documentary about a complicated legal dispute over a dinosaur skeleton?

The story basically goes like this: in 1990 a team of professional fossil hunters dig up a near-intact T-Rex skeleton in South Dakota. It is unquestionably the finest specimen of its kind ever discovered. They pay the land owner for the skeleton and take it back into town to be fully prepared and exhibited in the town museum. Then the FBI turn up to seize the skeleton, on the grounds that it was illegally taken from Federal land. Then the land owner from whom they purchased it denies he ever agreed to sell it. Then the Indian reservation which incorporates said land owner's land - which is itself held in trust by the US government - stakes a claim on the fossil as well.

You may think that's a lot for one documentary to untangle, but that's sadly only the beginning of the story. Over another seven years the story weaves and jumps in plot development after plot development, all of them true, all of them bordering on the inexplicable. This is one of the most gripping films I've seen all year, and at its centre is an animal that was already dead 65 million years before the lawyers got involved.

I was not expecting this film to be what it was. I did not anticipate getting as emotionally involved as I did, and I absolutely did not plan to be in tears by the film's final act. This is one hell of a documentary, and you should believe me because really: why else would someone make a feature-length movie about who owns a skeleton?
Posted by Grant at 7:05 AM