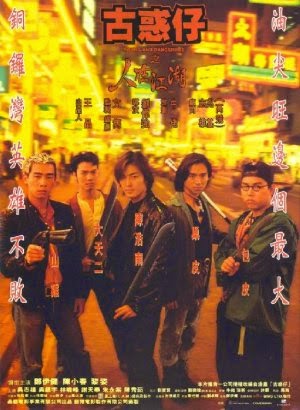 Young and Dangerous was released at the beginning of 1996: a collaboration between director and cinematographer Andrew Lau, screenwriter and producer Manfred Wong and executive producer Wong Jing. The film adapted the popular comic Teddy Boy by Cow Man, starred a group of up-and-coming Hong Kong stars such as Ekin Cheng and Jordan Chan, and successfully took Hong Kong by storm. The film was more than a success. It became a phenomenon, spawning five sequels, a prequel and four spin-offs between 1996 and 2000. Fourteen years later the film was still casting a shadow over Hong Kong cinema, with Ekin Cheng and Jordan Chan reuniting for the 2010 triad comedy Once a Gangster.

Young and Dangerous follows a group of five young men, friends since childhood, who work together for a local triad boss Brother Bee (Frankie Ng). When the power-hungry rival Ugly Kwan (Francis Ng) makes a play for the leadership of the entire triad, the five friends find themselves on the run and out for justice.

The film is, all things considered, rather odd. It is a film about triads, and organised crime, yet it focuses its entire attention on themes of brotherhood, loyalty and justice. For the five friends – Chan Ho Nam (Ekin Cheng), Chicken (Jordan Chan), (Jerry Lamb), (Michael Tse) and (Jason Chu) – belonging to a triad would appear to be about street fights with other gangs, going to karaoke bars and night clubs and standing by each other when times are tough. Actual criminal activity such as drug dealing, racketeering and grand theft don’t seem to enter the picture. If Young and Dangerous is to be believed, organised crime is all about friendship, loose women, cool clothes and great hair. There’s a vague moral insensibility to the film that earned it considerable criticism when released in Hong Kong. Watching it 15 years later and the criticism seems reasonably justified.

Ekin Cheng is an appealing lead, although perhaps a bit limited as an actor. The structure of film doesn’t really require too much in the way of acting. What seems most important is that he looks good, and he fulfils that requirement ably. Jordan Chan is thoroughly entertaining as his irresponsible best friend Chicken, as is Francis Ng as the scenery-chewing villain Ugly Kwan. Simon Yam makes a small cameo as the local triad head in that way that he regularly does. It certainly seems to be the most sedate and sensible crime boss he’s played.

Andrew Lau employs a loose handheld style for much of the film, which helps create a sense of immediacy and locality. The pace is brisk, the story melodramatic but engaging, the actors all rather entertaining. There is an overriding misogyny that lets the film down considerably. It’s not enough to derail the movie entirely, but it is powerful enough to leave a bitter taste in the mouth.

To be honest, Young and Dangerous is not in itself a particularly essential film. As a significant event in Hong Kong cinema, however, and as a precursor to several superior sequels and spin-offs, it’s very much worth tracking down.
Posted by Grant at 9:30 AM