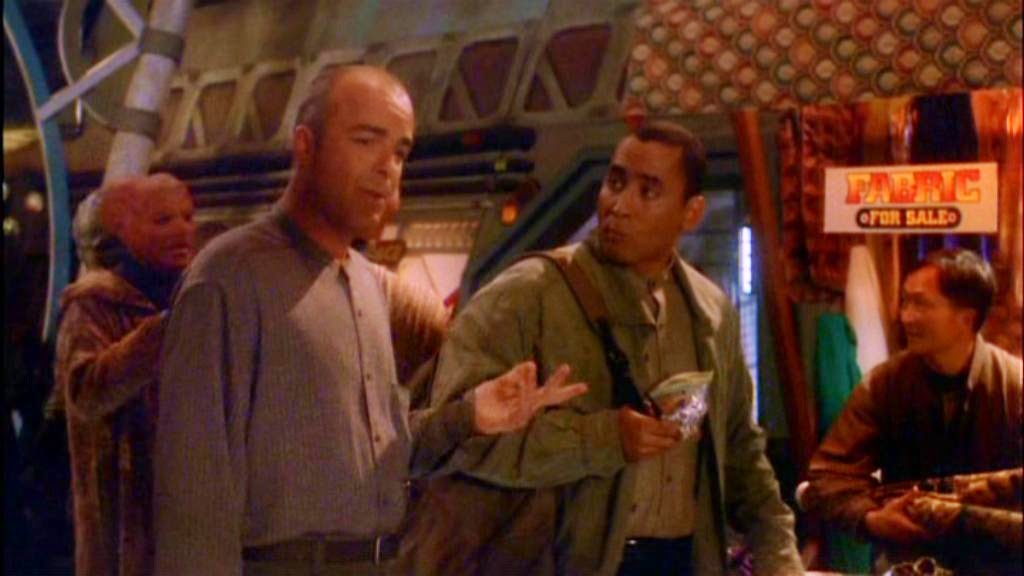 Dr Franklin wanders the corridors of Babylon 5 on a spiritual journey. The new Vorlon ambassador arrives to replace Kosh. Sheridan decides to test the Shadows' vulnerability to telepaths first-hand.

I honestly don't know what has made Franklin such a dull character to watch. Is it just Richard Biggs' performance? He certainly has a very limited range. Is it the dialogue that J. Michael Straczynski gives him? In most episodes he works like a bizarre form of cliché magnet, dragging in and grabbing onto the most tedious of plot threads and the the most trite and obvious dialogue. In this episode he goes wandering in "Down Below", meets a sultry African-American lounge singer, with whom he falls in love, has sex and then discovers she only really wants him for his prescription pad. No, wait! She's not a drug addict - it turns out she's actually terminally ill and has months to life. It's all so ridiculously banal and predictable. There's a galactic war going on, alien conspiracies coming from all directions, countless lives in the balance but by all means let's suspend all of that because Franklin needs to learn to embrace life again via a bundle of stereotypes. It's all just utterly dreadful.

It's also vaguely irritating to learn that Franklin is a "foundationist", which appears to be a 23rd century spiritual movement whose members culturally appropriate whatever aspects they think are cool from around the place. In this vein he's going "walkabout", having taken the concept ham-fistedly from indigenous Australians. Of course it's impossible for him to go out into the bush, so instead he's wandering along Babylon 5 for several weeks. This is an impressive feat, since the station is only eight kilometres long: he could travel from one end to the other within a day without difficulty. I wonder what else he's going to do for the next few weeks. Hang around in bars picking up more terminally ill lounge singers, I suppose. I hope that isn't the case: Richard Biggs has an insanely creepy "I'm really digging this music" face.

Meanwhile the new Vorlon ambassador arrives, who's visibly a much darker and meaner character than Kosh. It insists it also be referred to as Kosh, and isn't very nice to Lyta Alexander. Speaking of whom: where the hell has Lyta been? She hasn't been seen since "Passing Through Gethsemane".

Sheridan's attempts to test the powers of a telepath (lucky Lyta turned up) are engaging enough, but really aren't the focus of the episode. While they're easily the best part, there's simply too much of Dr Franklin's walking here to make the episode as a whole particularly entertaining. That leaves Season 3 with 12 good episodes out of 18: a quality ratio of 67%.
Posted by Grant at 10:36 PM