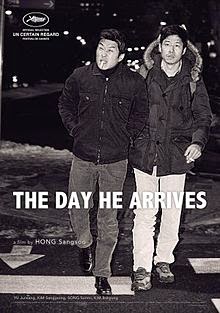 If you wanted to write an instruction manual on how to produce the most archetypal bad arthouse movie, you could do a pretty good job just cribbing every creative choice from The Day He Arrives. It's a 2011 independent drama from South Korea, and pretty much nails every cliche it can on its way through.

The film, which is written and directed by Hang Sang-soo, follows morose film director Seong-jun as he returns to Seoul to catch up with old friends and confront his past. He meets his friends, drinks in a few bars, reunites briefly with an old girlfriend, wanders the streets, and has a generally depressed and high introspective time of it. There's more than a little of Samuel Beckett to the film, since he pretty much does the same things with the same or similar people twice.

It's worth running through all of the ways in which this film irritated me, not for the purposes of review but as a warning for future filmmakers to aggressively avoid this sort of thing. Reviewing the film is actually pretty easy: it's a boring, self-indulgent waste of time, and thankfully its obscurity will make it unlikely that many will have the misfortune of stumbling upon it.

So: how do you go about making a bad arthouse flick? First of all, it's probably important to make it about something really lazy and self-important. You're a filmmaker - maybe base your screenplay around a depressed filmmaker? You can't make him happy. He needs to have emotional issues to work through as the film goes on. He also needs to be male. There's something about an over-arching sense of mild sexism that really works in a bad arthouse flick. Embrace that.

Whatever you do, don't make him likeable. One strategy to make him particularly awful to watch is to maybe have him unexpectedly visit a resentful ex-girlfriend, sob in a pathetic manner in front of her and then paw and hug her while she's begging you to stop. Embrace the man-pain. It makes the best bad cinema.

Secondly, you want to make your film mainly about conversations. Have people stand around talking to each other. The less focus the conversation has, the better. The more banal, the better. Lots of long conversations work themselves into a bad movie like nobody's business. To make your actors look more naturalistic and hip, have them all constantly light up cigarettes. It gives their hands something to do, and will distract from your screenplay.

Introspective voiceovers are great: remember, they may have taught you in film school to 'show, don't tell', but what did the qualified professors know? Tell as much as you can.

Shoot your film in black and white. It is the quickest way to improve the look of your photography, since it immediately makes everything look classy. After all, Woody Allen did it with Manhattan, which critics will be able to name-check when reviewing your film, even when that film is a masterpiece and yours is self-indulgent rubbish.

I could go on, but why bother? The emperor has no clothes. This is an empty exercise in onanistic instrospection. There are great modern movies shot in black and white. There are great movies consisting of lengthy scenes of dialogue. There are even many great films about unlikeable protagonists. The Day He Arrives is none of those movies.
Posted by Grant at 5:35 PM