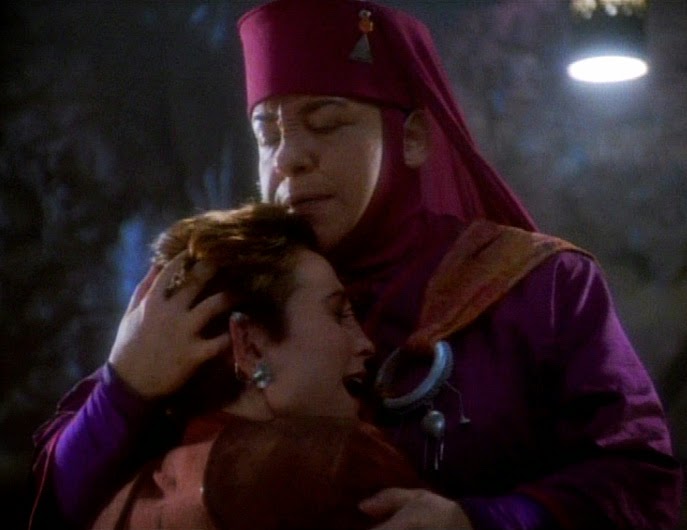 An oversight on my part saw me miss reviewing this episode, and posting a review of the next episode instead. So let's quickly jump back. This shouldn't take long, because I think there's a reason I forgot I had watched it.

Kai Opaka, spiritual leader of the Bajorans, makes her first-ever voyage offworld to visit Deep Space Nine and travel through the wormhole. When the runabout carrying her, Sisko, Kira and Bashir crash lands in the Gamma Quadrant, Opaka is killed - and the Starfleet team encounter a war that's been going on for a very long time.

I spoil Opaka's death because (a) it happens very early into the episode, (b) she's alive again by the second or third ad break, and (c) this is a really dull episode. You don't need to watch it. You can freely miss it. I almost did by mistake. All you need to take away from this episode is that Opaka is no longer Bajor's Kai - it's very relevant for the season finale.

The idea of a penal colony where the prisoners are constantly being killed and then resurrected via nanotechnology has merit. This episode simply doesn't find the best way to exploit it. The guest characters are all generic and dull - we only really get to know one of them - and the episode suffers immensely from a truncated budge. Any chance of an allegory being expressed is pretty much exhausted early on, in favour of a bit of running around and shooting at people.

What should be the central aspect of the episode - Opaka's death, resurrection and her remaining on the planet at the end - is sorely mishandled. This should be a huge event, at least the equivalent of Rome losing a Pope, but we're stuck on a planet full of brown caves and tunnels and never get to see Bajor's various reactions. We do get to see Kira's reactions, and her interactions with Opaka are pretty much the one redeeming feature of the episode. Given how little we've really seen of Kira this season, it does feel more than a little formulaic and cursory.

I think perhaps the episode would have had more weight if we'd seen Opaka more often. She made a critical appearance in the pilot, but hadn't been seen since. Maybe one episode in between would have helped cement both her character and Kira's. All we have here are lost opportunities. Seven good episodes out of 13 leave a quality ratio of 54%.
Posted by Grant at 7:04 AM