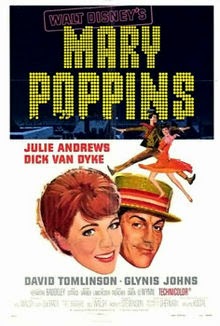 It was a contentious film at the time, since it took fairly serious liberties with Travers' novel, and generally against her wishes and better judgement. The historical setting was changed. Mary herself was made a much less authoritarian character. On the other hand, Bill Walsh and Don DaGradi took a beloved but rather simplistic children's book and transformed it into a heartfelt story about a father who properly discovers his children for the first time.

This, to me, is the genius of Mary Poppins. It's pretty much the most nuanced and melancholic of all the classic Walt Disney productions. Sure it has cartoon penguins, rousing musical numbers and comedy chimney sweeps, but Mr Banks' slow night walk to the bank in order to be fired - his ordered life in utter disarray - is one of the most emotionally effective scenes to ever come out of the company.

David Tomlinson never really got the critical attention that he deserved. He made two really notable appearances for Disney, both directed by Stevenson: this, and its spiritual sequel Bedknobs and Broomsticks. They were just two roles in a career that spanned four decades, incorporating early post-war dramas for the BBC and films in both the UK and the USA. When a lot of people think back on Mary Poppins they think of Julie Andrews, but it's Tomlinson who makes the movie.


Even at the film's end, where Mr Banks takes his children down to the park to fly a kite, it's Mary who winds up alone. 'It's as it should be,' she flatly remarks, but it's still an unexpectedly hollow and depressing note on which to end a movie. Even the film's best song, "Feed the Birds", is about the most melancholic number the Sherman brothers ever composed.

Early attempts by Disney to create a family musical (notably Babes in Toyland) were superficial, grating affairs, marked by a crude naivety and a saccharine approach to plot and character. Mary Poppins managed to move beyond that, find a genuine heart at its centre and really connect with audiences. It wasn't just a popular hit. It remains the most widely Oscar-nominated film that Walt Disney Pictures has ever produced, with 13 nominations and five wins - including Best Actress for Julie Andrews, Best Original Score and Best Original Song.

Robert Stevenson never gets the critical attention he has long deserved. He was a director-for-hire, calling the shots on whatever film he was contracted to make, but he pretty much single-handedly defined the look and tone of Walt Disney's live action films for about 30 years. It was only in the late 1970s that the studio really broke away from his model and tried new things.

I know that the original novel has its fans, but to me it isn't a patch on the film. I'm aware that Pamela Travers hated what Disney did to Mary Poppins. I'm also aware that writers can be wrong. If Mary is remembered and beloved in another 50 years' time, it's going to be because of Stevenson's movie.
Posted by Grant at 10:41 PM