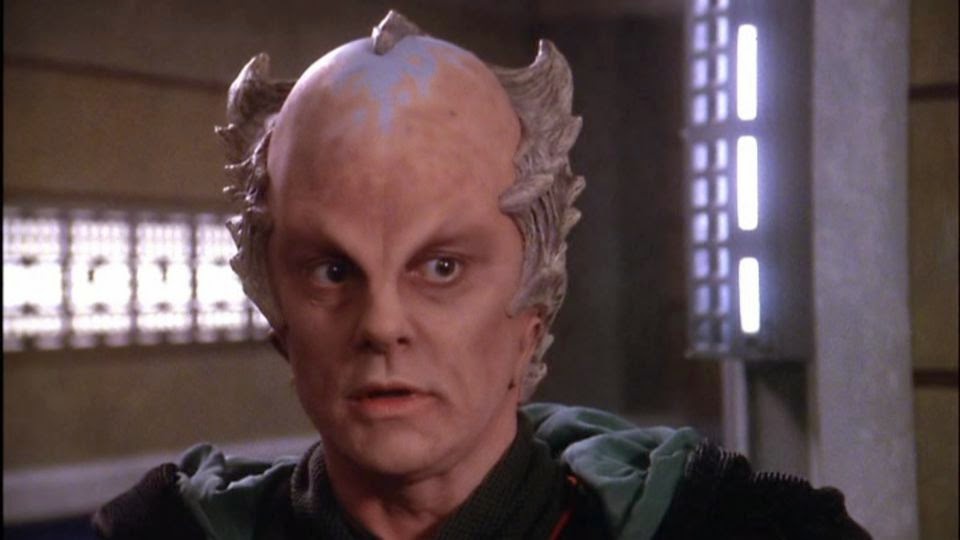 "Grey 17 is Missing" does not have the best of reputations. Like a lot of Babylon 5 episodes it is a story with two halves, one of which is broadly satisfactory, the other of which is tedious in the extreme. The better half focuses on Neroon's veiled threats towards Delenn: Minbari have a very strict moral code about murdering each other, and this code has been well emphasised through earlier seasons. As a result Neroon's murderous plot brings a lot of dramatic weight. It seems that Minbari society may be hovering on the edge of collapse. This is a revelation that the series fully earns, because it's been simmering away in the background for some time.

The storyline allows the series to showcase Delenn's faithful aide Lennier, who is a badly underused and underrated character, as well as Ranger Marcus Cole. I'm not a very big fan of Marcus. He hasn't really been used that much in the series, and when he has he's been saddled with some fairly excruciating self-aware dialogue. I've spoken in the past about Babylon 5 characters speaking dramatic dialogue rather than simply speaking - Marcus is one of the worst culprits. It's not helped by Jason Carter being a relatively limited actor; if he were more accomplished, like Peter Jurasik or Andreas Katsulas, he'd probably be able to draw mileage out what he was given on the page.

The other half, however, with Garibaldi becoming trapped within the previously undiscovered Grey 17, leaves a lot to be desired. He is ambushed, shot by a dart from a ventriloquist's dummy, lectured to about religious by a scatty madman (Robert Englund) with some vacant-faced henchmen, and then defeats a giant monster using some old-school bullets he happened to have been playing with that morning. This is dreadful writing. This is absolute ham-fisted amateur hour stuff.

The basic concept of there being a hidden level somewhere in Babylon 5 is a genuinely good one. Imagine what you could place inside that secret area. Is the Nightwatch based there? Or some kind of Earthforce intelligence agency? The Psicorp? The Shadows themselves, lurking invisibly around the station without anybody's knowledge? A refugee community of Narn? An entire group of the Minbari warrior caste lying in wait to violently overthrow Delenn? A dead body whose identity leads Garibaldi on a cold case murder investigation? I've just listed seven possibilities off the top of my head, and they'd all be more interesting than what Straczysnki puts there. A crazy man randomly fussing about star dust and reincarnation, and a giant rubber-suited monster.

I really like Robert Englund. I think he's a tremendously underrated actor who became broadly type-cast by his playing A Nightmare on Elm Street's Freddy Krueger for seven films in a row. He's utterly wasted here, to such a degree in fact that it made me slightly angry. Garibaldi's adventures on Grey 17 are simply time-wasting of the most egregious kind. They don't inform the broader ongoing narrative and they're not independently dramatic. They're just the aimless turning of wheels to take up running time until the episode can be done and the series move on.

So this episode gets a pretty definitive thumbs-down from me. That leaves Season 3 with 12 good episodes out of 19. Three episodes left, and the quality ratio is 63%. That's below what Season 2 received overall, so for the series' sake I hope the next three episodes are good.
Posted by Grant at 5:03 PM