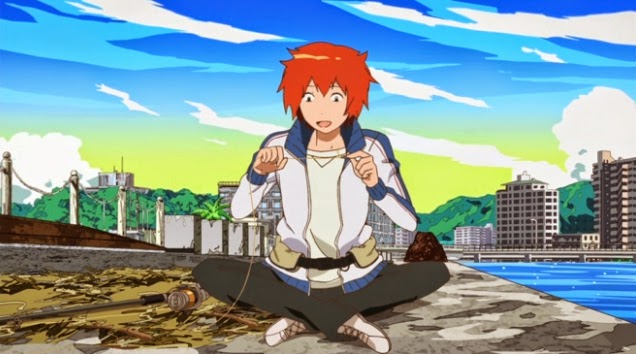 Yuki is confronted by Haru's sister Coco, who tells him he must learn fishing to help save the world. He agrees to fish for a sea bass to prove his loyalty (at the end of a mind-controlling water pistol), only to fail at the first step because he can't tie an uni knot to keep his lure secure. Meanwhile Haru decides to give Yuki the space he needs to actually became his friend - at least he hopes that's what will happen.

So I'm two episodes into Tsuritama, a series that I deliberately went into cold and which turns out to be an anime about saving the planet by going fishing. It's got a lot going for it: weird characters, a humorous script, plenty of imagination and a bright, summery use of colour. That said, it's currently being crippled by two problems.

The first is the music, which grated on me a bit in the first episode but which eventually settled down. In the second episode I found it shriekingly awful, blaring a bit too garishly and much too loudly over every scene. It dominates where it should be in the background. It keeps shouting 'this is quirky, dammit!' when the scene on its own was more than enough to demonstrate its quirkiness. It's as if the composer and the producers didn't trust the material to speak for itself.

The second is Yuki's voice. I'm watching this series via the English language dub - if possible I always watch an anime in English first, because it allows me to pay more attention to the story and to the visuals. If I watch a series a second time, I'll watch it with the Japanese dub. Clint Bickham plays Haru at a pitch just too high to be tolerable. I get that he's an overexcitable alien kid, but he's just too much to listen to on a regular basis. I may have to switch over to the Japanese soundtrack and see if things get better. (Of course this may not be Bickham's fault - actors get directed, after all, so it may be the voice director telling him to dial it up so high.)

This was an okay episode, but the music and Bickham's performance really dragged it down. I'm giving this one the thumbs-down, so that leaves Tsuritama at 50% after two episodes. I'm intrigued enough to keep going, though.
Posted by Grant at 8:51 PM