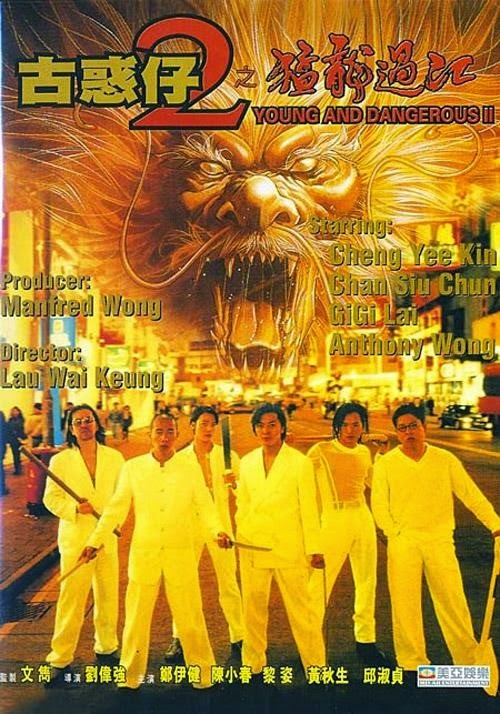 Less than three months after Young and Dangerous took the Hong Kong box office by storm, Young and Dangerous 2 was out in cinemas, offering fans of the first film a hasty second instalment of the youthful, energetic Triad soap opera. The ridiculously short span between the original film and its sequel suggests either the production team shot both films at once or, strangely more likely, an incredibly rushed sequel shot and edited at breakneck pace to get onto screens while audiences were still raving about the first film. To be honest, knowing the Hong Kong film industry, either possibility could be true.

Very little has changed from the first film to the second. Most of the original cast returns, including Jason Chu in a new role. The visual look and tone of the film is identical. Both films even share key plot points – notably a twist mid-film where members of the Hung Hing gang are framed for a crime they didn’t commit. Audiences seeking more of the same will likely be satisfied with this. Audiences wanting to see the story taken in a new direction, or significantly expanded, will not find a lot to enjoy.

Young and Dangerous 2 is a film of two halves. The first half capitalises on the enormous popularity of Jordan Chan’s character Chicken, and fills in the gaps of his absence halfway through the original film. We follow him to Taiwan, where he joins a Taiwanese Triad while waiting for the heat to die down from his gang’s botched assassination in Macau. This opening section is easily the most satisfying part of the film, and actually does expand the Young and Dangerous universe a little bit.

All too quickly, however, Chicken is back in Hong Kong to join Chan No Ham (Ekin Cheng) and his buddies for more internal conflicts within Hung Hing. With Brother Bee dead, a vacancy is open for the leadership of Hung Hing’s Causeway Bay branch. Chan Ho Nam seems the most likely successor, until his appointment is challenged by rival member Tai Fei (Anthony Wong). A growing war builds between the two camps, a war complicated with Chicken’s Taiwanese associates arrive in Hong Kong with an eye to muscling into the local business.

Anthony Wong is a surprise in this film. He is an actor best known to me for playing stoic, considered hitmen in Johnnie To crime dramas. Here he plays a flamboyant, dishevelled gangster, with long messy hair and an unpleasant habit of picking his nose. He is the most entertaining character in the film, and helps lift Young and Dangerous 2 from being an ordinary sequel to being something at least a little more interesting.

Most of the problems with the original film remain evident here: it’s still rather misogynistic, and tends to glamourize the Triad lifestyle a little too much. It is also a film impossible to completely follow and enjoy without having seen the original film. It is, all things considered, a superior film to its predecessor, but a clunky plot structure and a pervading sense of ‘been there, done that’ stop it from completely succeeding on its own merits.
Posted by Grant at 9:19 PM