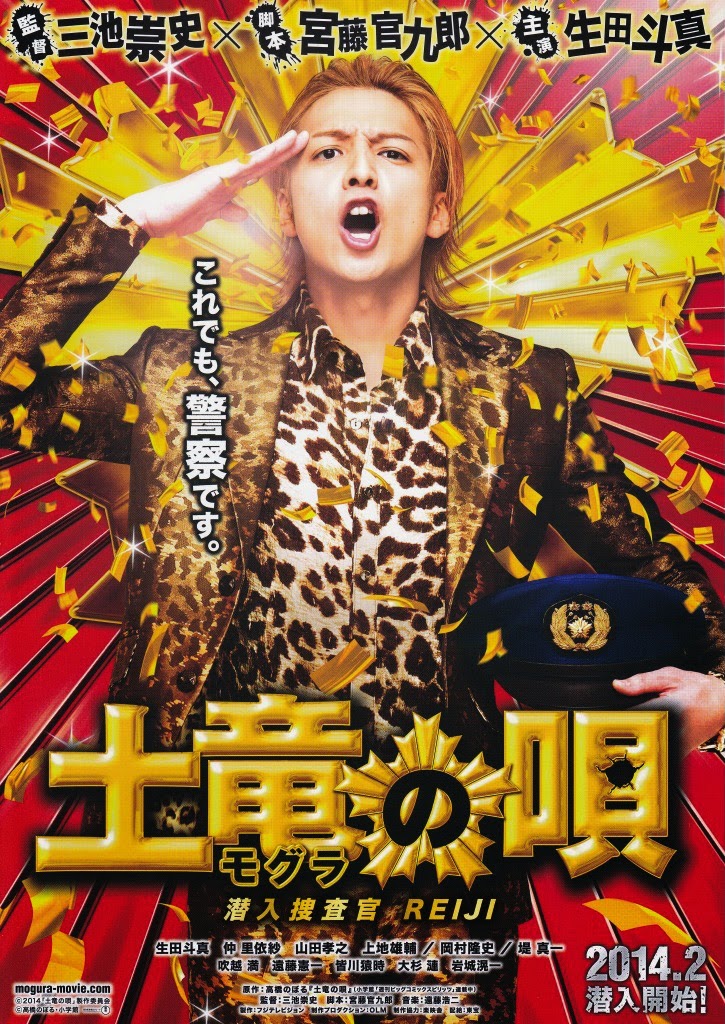 Japanese director Takashi Miike is one of the world's most versatile filmmakers, working at a furious pace across a broad range of genres and subject matters. His directing schedule has slowed down somewhat in recent years: between 2001 and 2002 he directed 15 feature films, TV specials and direct-to-video productions, whereas in 2013 he directed just two. The first, the police thriller Shield of Straw, I reviewed some months ago. Last night I watched the second, the manga adaptation The Mole Song: Undercover Agent Reiji, which is playing as part of this year's Melbourne International Film Festival.

The new film follows Reiji (Toma Ikuta), pretty much the worst junior police officer in Tokyo, who gets conscripted into a top secret mission to infiltrate a major yakuza clan and gather evidence on its drug distribution operations. It begins with Reiji tied stark naked to the front of a car that's been driven at 80 miles per hour around central Tokyo, and works its mad, frantic way from there.

This is a ridiculous movie; deliberately so. The plot flies thick and fast, the jokes come in a seemingly unending flood, the characters are all ridiculously broadly drawn, and there's no line of dialogue not delivered with some form of brooding intensity or over-the-top screaming. If there's a criticism to be made it's that the film gets a little bogged down towards the end of the second act. It's a 130 minute comedy, which is reaching Apatow-lengths of self-indulgence, and while I loved the movie for the most part 10 to 15 minutes could be trimmed from it and make it even better.

Toma Ikuta is an immensely appealing lead, playing Reiji with a blend of incompetence, foolishness and charm. The character is utterly out of his depth, and Ikuta does a good job varying the tone of his performance as he goes: sometimes running around in a blind panic, sometimes headstrong and over-confident. Reiji is an idiot, but he's an idiot we like. The supporting cast are hilarious, notably Shinichi Tsutsumi as the mid-level yakuza brother Masaya Hiura, aka "Crazy Papillon", whose hand-crafted suits are adorned with various butterfly motifs and designs. He swears a bond of brotherhood with Reiji very early on in the film, and they make a strong double act together.

It's not just Papillon's butterfly suits that make a visual impact. The film's costume designer has clearly had a field day, as have the production designer and Miike himself. The Mole Song is a riot of colour and movement, so far removed from Miike's more serious films (13 Assassins, Audition) that you'd be forgiven for thinking it was the work of a different director.

A few moments do skirt the line of being a little repugnant towards women - often a risk in Japanese cinema - and it must be said that this is an overwhelmingly male film. The one female lead, Riisa Naka, acquits herself well but arguably doesn't get enough to do. I couldn't decide whether the film is attempting to parody chauvanistic attitudes in yakuza cinema or simply indulging in them - either way it could do better. It also gets surprisingly violent from time to time. Slapstick becomes a much harder proposition when the guy doing the pratfall gains an open head wound, and it seems no matter how far Miike stretches himself beyond the films that made him famous internationally those confrontational moments of physical violence are never far behind. For me these moments gave the film an edge; other viewers may find them needlessly graphic and unpleasant.

The Mole Song leaves itself wide open for a sequel, which I wouldn't be surprised to see within the next year or two. Certainly this first film was appealing enough that I'd be happy to spend more time with these people. All up it's ridiculously good fun. Miike may be slowing down as he gets older, but his status as Japan's most inventive and versatile filmmaker seems pretty secure.
Posted by Grant at 9:58 PM