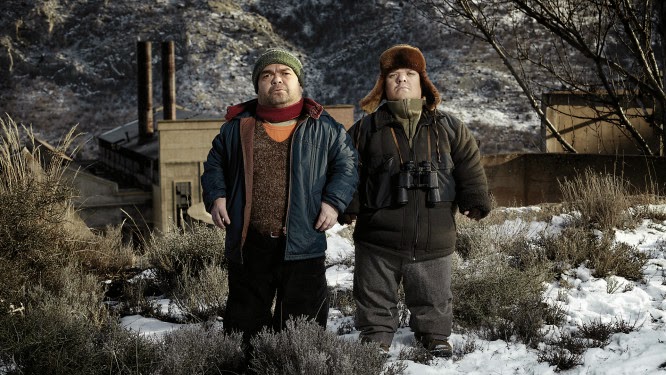 Okay, let's see if you can wrap your head around this: from a warehouse next to an old power station in Siberia an Austrian performance artist hires three psychic Russian dwarves to undertake a heist: steal the mysterious device known as "the Distance" from under the nose of the Russian security guard, who is being distracted by a Japanese-speaking haiku-obsessed bucket of smoke that has amorous intentions towards the chimney of his nearby hut.

The Distance is a new film by Spanish director Sergio Caballero, whose 2010 film Finesterrae won a few awards and made quite an impact on the festival circuit. This Russian-German-Japanese language follow-up is going to delight some viewers and frustrate quite a few more with its deliberately odd blend of science fiction, observational drama, surrealist pretension and Russian art film pastiche. At the end of last night's screening the audience split two ways: one half laughing uproariously at the unexpected climax, and the other audibly groaning and muttering bitter resentment all the way out of the theatre.

The film is a pitch-perfect satire of Russian arthouse cinema. Its debt to Andrei Tarkovsky, particularly his film Stalker, is visible throughout. The Distance works on a slow build, meticulously detailing - day by day - the three protagonists' plans to steal the Distance from the power station. It doesn't really have jokes or gags. It simply sets up surreal scenes and moments so mind-breakingly absurd that you wind up laughing with it.

We spend most of the time with the three psychic dwarves. The taciturn Scumeck is the team leader, possessing telekinetic and teleportational powers. Clairvoyant Volkev is the meekest of the three, with a nervous disposition and a squeaky voice. Baransky is actually rather creepy: he makes his debut in the film murdering a man in an apartment and stealing some inexplicable piece of electrical apparatus. He also listens to recordings of screaming women when trying to relax. All three turn up close to the power station in sedan cars with attached caravans. Their odd, bickering interactions give the movie a lot of its charm.

This is a strange movie, and appreciation of it is going to vary wildly from person to person. I adored it. This is brave, unusual, deliberately confusing cinema, best enjoyed by simply relaxing and letting Caballero's whimsy take you on the ride, right up to the point when he playfully bites the hand that's feeding him.
Posted by Grant at 7:13 AM