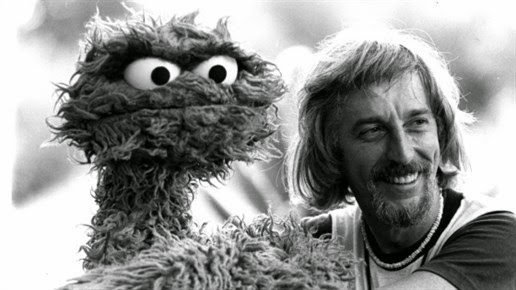 Three years back I was really taken by Constance A. Marks' Being Elmo, a great documentary about Sesame Street performer Kevin Clash. This year the Melbourne International Film Festival screened its spiritual cousin: I Am Big Bird, a new Kickstarter-backed documentary that focuses on Big Bird and Oscar the Grouch puppeteer Caroll Spinney.

It's impossible not to compare the two, since they cover very similar grounds: both men started puppeteering at a very early age, both were picked up by Jim Henson to join the Muppet team on Sesame Street, and both performed characters that became international sensations. Of the two it's Being Elmo that is the superior movie: better paced, more engagingly presented and with a more carefully crafted narrative. This isn't to say I Am Big Bird is not worth watching: it remains a loving insight into a very intriguing and talented figure in American pop culture.

The documentary works in a broadly linear fashion, taking us through Spinney's difficult childhood, his early work with Bozo the Clown, and his personal hiring by Jim Henson to join the team on the newly developed Sesame Street in 1969. All of the people you would expect to be interviewed turn up, including Sesame creator Joan Ganz Cooney, fellow puppeteers Frank Oz and Jerry Nelson (recorded shortly before his death in 2012), and human co-stars Bob McGrath, Loretta Long and Emilio Delgado.

Some key elements stick in the mind, such as Spinney travelling to China to perform as Big Bird opposite Bob Hope, and his thankfully cancelled trip into space as part of a NASA children's education program (school teacher Christa McAuliffe went in his stead, since Big Bird would not fit in the shuttle, and she died along with her crew members when the space shuttle Challenger exploded). Jim Henson's funeral gets an expected check-in, replete with Spinney in costume as Big Bird tearfully singing "It's Not Easy Being Green" to a packed cathedral of mourners; it's quite possibly the most disturbing and surreal moment in American popular culture, and it's worthwhile finally hearing Spinney talk about it himself.

What we basically have here is a broadly entertaining documentary on a fascinating subject. Obviously it's of more interest if, like me, you're a big fan of Jim Henson and the Muppets, but even if you're not, who doesn't like Big Bird? It does get a little unfocused in its final half hour, but the end result remains very much worth your time.
Posted by Grant at 7:15 AM