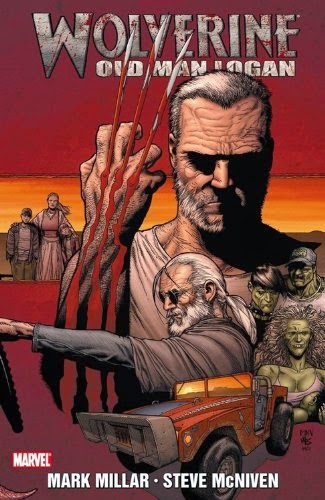 "Old Man Logan" was a story arc that ran in Marvel's monthly Wolverine comic for seven months in 2008 before being concluded - somewhat tardily I recall - in a giant-sized final issue about a year later. It was written by Mark Millar with art by Steve McNiven. I never read it at the time, mainly because I've traditionally been more of a DC fan than a Marvel fan, and certainly never read Wolverine. I have, however, now read it in a collected edition, as part of the fortnightly Marvel Graphic Novel Collection to which I have been subscribed these past few years.

The first thing I wanted to note is that McNiven's artwork is great. He's a stunning comic book artist and packs an extraordinary amount of realistic detail into each panel. I'm not surprised there were delays in completing this arc: McNiven's work must take him an absolute age to finish.

That out of the way, it has to be said that this is an appallingly poor comic book. It is pretty much a poster child for Mark Millar's writing in general: great high concepts saddled by adolescent execution.

50 years after a catastrophic event killed most of the world's superheroes, the USA is divided among a group of supervillains. In an isolated farm somewhere in California - now ruled by a hillbilly Hulk and his in-bred descendants - the man once known as Wolverine scrapes out a meagre living with a wife and two kids. Logan refuses to fight any more. The metal claws that defined him as a superhero haven't been drawn in five decades. When an old and blind Clint Barton offers Logan are courier job, he accepts to pay his overdue rent to the Hulks - but he refuses to fight, no matter what happens.

On the surface this book should be a great alternate future storyline. It certainly it includes a lot of quite inventive details, like the elusive moloids that are sinking America one city at a time, or the rogue Savage Land dinosaur running around attached to the Venom symbiont. It also includes several that seem actively distasteful, particularly a loathsome re-imagining of the Hulk who, by having sex with his cousin Jennifer Walters, has fathered an entire generation of clichéd green hillbillies.

The violence, of which there is plenty, is particularly graphic and excessive. People aren't just murdered: they're eviscerated, disemboweled and decapitated. It all seems undertaken for pure shock value. In one key flashback we discover why Logan quit being Wolverine. We should find it to be a particularly shocking moment, and it would be if it were not surrounded by so much casual violence in the rest of the comic.

As I mentioned above, this is pretty much Mark Millar in a nutshell. He is great at developing simple, engaging hooks for stories, but he seems incapable of writing anything for a purpose beyond shock value. It's like watching a 14 year-old gleefully trying to be offensive, and all you can do is roll your eyes, look the other way and hope they'll get bored and wander off. I found this to be the case with Civil War, Wanted, Kick Ass and particularly the loathsome Kickass 2. It's the case here. It's a shame.
Posted by Grant at 10:27 PM