Pulp: A Film about Life, Death and Supermarkets (2014) 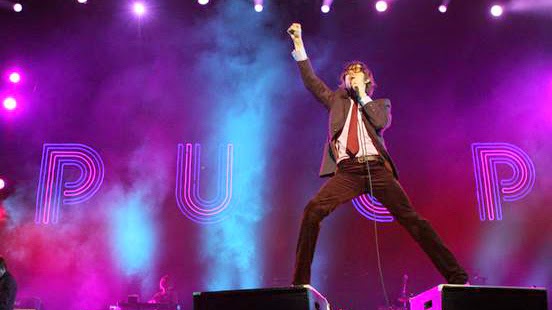 In 2011 the brilliantly entertaining British pop group Pulp reunited for one final tour, climaxing in a sold-out concert in the band's home town of Sheffield in December the following year. This final concert forms the centre of a documentary, Pulp: A Film about Life, Death and Supermarkets. Directed by New Zealand filmmaker Florian Habicht, it is a blend of concert film and two intertwined documentaries - one about the band itself, and another about the northern city from which they came.

I'm quite a fan of Pulp, and indeed saw them perform during the Australian leg of the film's tour. To me they were the best of the various Britpop bands of the 1990s - although of course Pulp predated that particular craze and continued for quite a few years after it. That said, I'm still not altogether sure what I think of this film. I went in expecting a concert film with some interviews peppered through it, and instead got something that felt a lot less balanced. There's some concert footage, but arguably nowhere near enough, and while the members of the band do get a look in it's Sheffield itself that gets the lion's share of the movie.

It's the Sheffield elements that cause all of my problems with this film. Habicht interviews a range of random people on the street - a pair of old ladies, a newspaper vendor, some teenage girls, a few children, and their responses seem to illustrate little about Pulp, Sheffield, or the latter's influence over the former - other than the obvious point that all of the band's members used to live there. Despite some sporadic entertaining moments, too many of these vox pop sequences felt as if they were selected because Habicht found the participants funny or quaint, rather than because they had something interesting to say. It rapidly becomes tiresome. One pair of participants, young Sheffielders who met and fell in love in a psych ward, do tell a genuinely interesting and heartfelt story, but they feel like ring-ins from an unrelated documentary.


Much more successful are the brief interviews with the members of the band. Habicht interviews them separately, which is a smart move: like many bands Pulp was always dominated by its lead singer, and splitting the others apart from Jarvis Cocker visibly allows them to open up and discuss their own personal feelings about the band and its reunion. Most interesting of all is keyboard player Candida Doyle reflecting on her rheumatoid arthritis - a condition she has had since her teens but which she kept hidden from the public throughout the band's lengthy career.

The film also features a few weird interludes: Jarvis replacing a flat tire on a car, and a pensioners choir singing "Help the Aged". They're appealing and rather sweet, but again don't really gel with the rest of the film. Concert sequences are irritatingly brief, including - for some reason - "Common People" appearing twice.

In the heat of the moment I found enough in Pulp to get me broadly amused, but its faults feel bigger over time, and its highlights less special. Fans of the band probably don't need a recommendation to see it. Those on the fence can find better documentaries elsewhere.
Posted by Grant at 3:51 PM