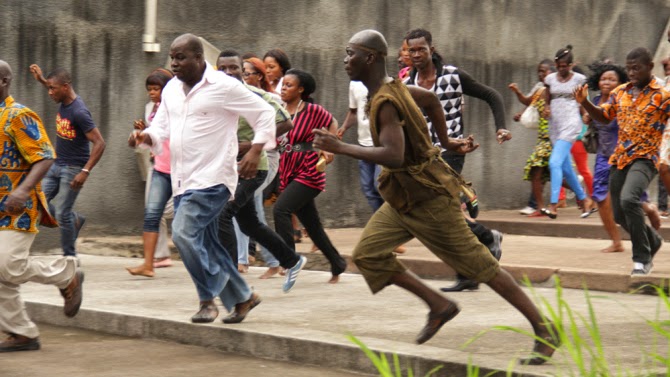 Run (Abdoul Karim Konate) is a young Ivorian man who has just shot the Prime Minister of the Ivory Coast. As he hides from the authorities hell-bent on hunting him down, a series of flashbacks show how he made the journey from abandoned orphan to rainmaker-in-training to patriotic militiaman and, finally, to political assassin.

I don't think I've seen a movie from the Ivory Coast before. It's not exactly a country known for its cinema. Africa in general isn't a hotbed of internationally distributed and feted motion pictures. Run appears to be the Ivory Coast's biggest-ever motion picture achievement. It was the first film from that country to play at the prestigious Cannes Film Festival, and now it's enjoying a well-deserved run of the festival circuit. This isn't just a case of condescending cineastes indulging in a little bit of cultural tourism: Run is an absolutely stunning achievement in filmmaking.

Writer/director Philippe Lacote tells his story with a languid, oftentimes lyrical tone and pace. It's not a fast, frantic film, although it is occasionally punctuated by moments of violence. It's split rather neatly into three flashbacks, each of which illuminates a little bit more of Run's growth from child to man, and tracking his path to the violent murder he commits in the film's opening moments.

The first act is perhaps the film's strangest, as Run is apprenticed to a local rainmaker; a shaman whose incantations and rituals bring about the seasonal rains. There's a strong seam of magical realism throughout this section, and it's one that echoes throughout the rest of the film. The film doesn't seem to treat it as fantastical, however, simply as another layer of common-or-garden reality.

When his apprenticeship fails Run takes up with Gladys (Reine Sali Coulibaly), a 'professional eater' who travels from town to town eating vast quantities of food for a paying audience. I have no idea if professional eaters are a real thing, or if they've been invented by Lacote for this film. What I do know is that Gladys is the film's most heartfelt and touching character, and when she and Run part it's the film's most heartbreaking moment. Coulibaby delivers a brilliant performance here; she's the best actor in a universally outstanding cast.

The final part of Run's journey takes him into an aggressively patriotic group of political agitators whose ostensible goal of ridding the Ivory Coast of foreigners rapidly segues into a goal of seizing money from local businesses. It's here that the film shifts into a much more realistic and quite brutal kind of a story, and really drives home just how turbulent and dangerous the Ivory Coast can be.

This is a beautiful film, and I love that it's been told in such a slow and measured way. I suspect it may be a difficult film to source once it's finished on the festival circuit, but if you ever get the chance track it down and check it out. It's something special.
Posted by Grant at 8:36 AM