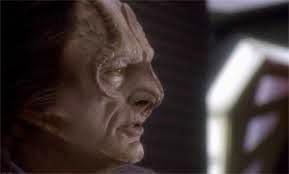 A Cardassian arrives on the station and is immediately taken into custody on suspicion he may be a war criminal for a notorious occupation labour camp. While Major Kira fights Sisko to have him extradited from the station to Bajor, the Cardassian's account simply doesn't add up - and he may be a more dangerous enemy than Kira first suspected.

"Duet" is one of those rare hours of television that prompt me to call it "a masterpiece". It's simply a beautiful piece of fiction. It is well written, well directed and performed brilliantly by both the regular and guest cast. It uses science fiction to ask questions of the real world, and presents a valuable and provocative allegory. It develops Major Kira as a character in a profound way, and stands heads and shoulders above every other episode of Deep Space Nine's first year. Throughout this Season 1 rewatch I've been eagerly anticipating rewatching "Duet"; it's always been one of my favourites, and it didn't disappoint.
At the episode's centre is the Cardassian filing clerk Aamin Marritza. He claims he's an innocent bureaucrat, but as Kira digs deeper into his story it becomes clear that he's lying. He seems a genuinely nice and likeable person as first, bending our sympathies towards him. Then it's revealed he's actually Gul Darhe'el, the notorious "Butcher of Gallitep", and our perspective is forced wildly out of joint. He is a monster: a sadistic tyrant responsible for the torture and murder of hundreds of innocent Bajorans. The contrasting portrayal of Marritza/Darhe'el is masterfully handled by guest star Harris Yulin, who successfully elicits sympathy and warmth for us, and then discomfort and disgust. At no point through the episode is he anything less than riveting. There have been a lot of excellent guest stars over Star Trek's many iterations. Yulin remains one of the all-time best.

The discovery of Darhe'el places Kira into a powerful emotional space, and forces her to confront difficult questions. Where is the line between justice and vengeance? Where does her fight for justice end and her racism begin? And there's definitely racism here: I can't imagine Voyager or The Next Generation ever getting away with showcasing and confronting one of their protagonist's bigotry in such a genuine and open fashion.

The episode is at its best when it puts Kira and Darhe'el in a room and leaves them there to talk. There's a wonderful intimacy to this episode, because it's not about starship and phasers but rather just people and emotions. The episode's climax is stunning, and is the perfect conclusion to such a highly charged, troubling hour of television. The denoument is perhaps the episode's only weak point, if only because it feels remarkably abrupt. It does show how far Kira has come in the one episode, though.