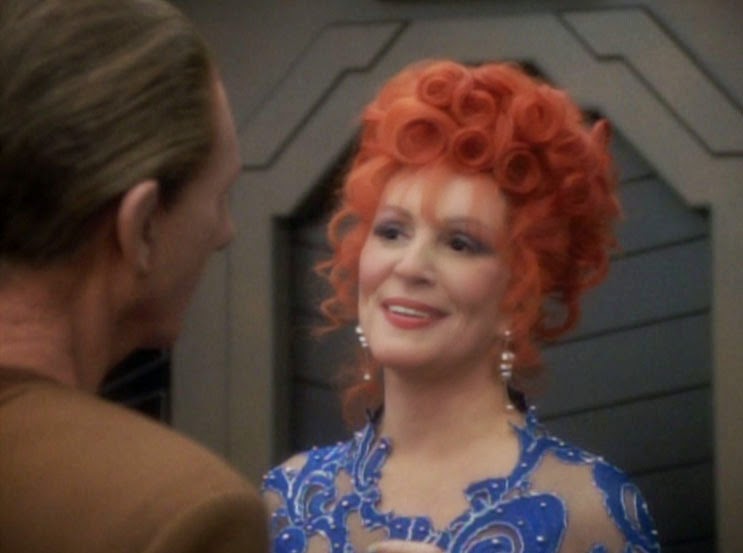 Dr Bashir is stuck escorting three Federation ambassadors around the station, while Odo avoids the amorous attentions of Lwaxana Troi who-

No, sorry. I don't care. I tried. I gave it my best shot. I went in with as open a mind as I could manage, and I completely failed to engage. I don't think there's a single character in the entire 728 episodes and 12 feature films of Star Trek who irritates me as much as Lwaxana Troi. She was introduced in the first season of Star Trek: The Next Generation as the grand, overly dramatic mother of Enterprise counselor Deanna Troi, and I hated her. She returned multiple times to The Next Generation and I hated her then. Now she crops up, rather ridiculously, for the first of three appearances of Deep Space Nine, and I simply can't bring myself to give a damn.

I actually find her entire character mildly offensive, since she falls into this awful cliche of the sexually aggressive middle-aged woman who makes unwanted advances on naive, younger men. Odo may not be younger - who knows how old he is? - but he certainly qualifies as naive. As a result Lwaxana's non-stop sexual overtures constantly make her about as deeply unlikeable as she could possibly be. Her predatory behaviours were tiresome in Season 1 of The Next Generation, and they haven't become less tiresome with familiarity. If someone makes a romantic overture, and you turn them down, it's inappropriate for them to make another overture. It's flat-out wrong for them to make thirty or more. Lwaxana Troi needs to be lined up next to Julian Bashir and legally prosecuted for sexual harassment.

And once you remove her from the piece, it becomes apparent that there really isn't much left to the episode. An alien probe floats past, and O'Brien inadvertently downloads a sentient computer virus, but that only serves to awkwardly trap Odo and Lwaxana in an elevator for half an hour.

Towards the end there's actually some rather nice writing: Odo and Lwaxana do emotionally connect, as she takes off her ridiculous wig and he reverts to his natural liquid state in front of her. The problem is that it's too abrupt, too little too late and isn't earned by the preceding scenes.

This was the last of the Deep Space Nine episodes that re-used Next Generation guest stars to ease audiences into the new series. They were never needed: strong characters and setting would have allowed audiences to engage all by themselves. Crucially not one of these episodes was actually any good. Rather than helping cement the series, they worked to hold it back. Once they were out of the way, Deep Space Nine progressed on a much surer footing.

This is the 925th post on The Angriest. Thank you for reading.
Posted by Grant at 8:18 AM