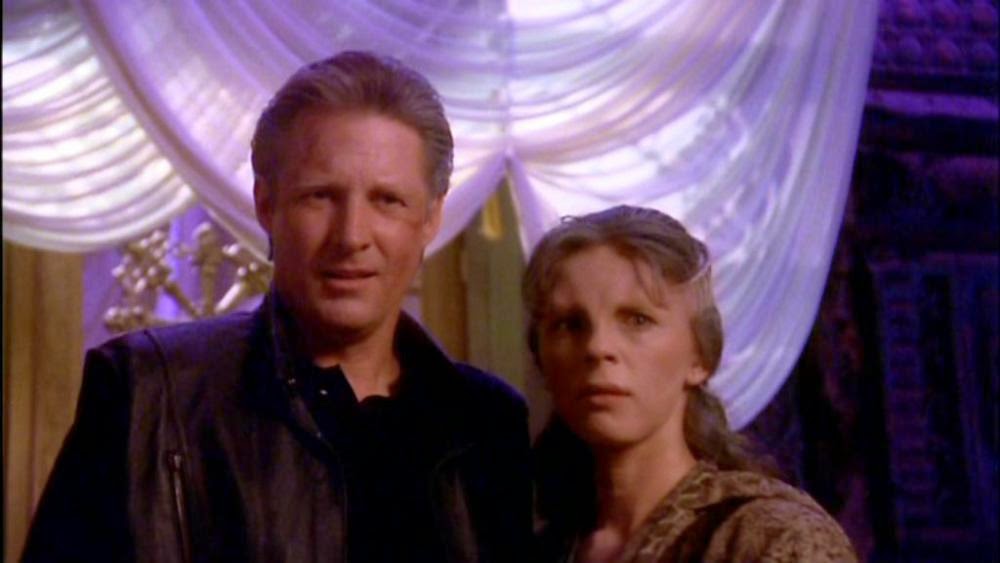 While Delenn's team work to send Babylon 4 back in time to the last Shadow War, Sheridan is lost in time - and gaining unwanted insights into his own future.

Part of the pleasure of "War Without End" is seeing how the mysteries of the Season 1 episode "Babylon Squared" are resolved and what was actually going on. I can't think of another TV series where a writer deliberately set up a mystery and then waited two years to resolve it. The match-up between the two episodes may not be entirely precise - Zathras' capture in one contradicts events in the other, and his definition of "the One" feels awfully tacked-on to accommodate the series' change in lead actor - but all in all it's a mightily impressive achievement.

There is some remarkably bold storytelling going on in this episode. It isn't content to wrap up a two-and-a-half year-old mystery, it also showcases future events and pushes the series forward. That's pretty impressive for an episode that's all about sending people back in time. We now have several major plot developments on the horizon, with no real idea of what they mean and how they get there: Sheridan and Delenn have a child, Londo and G'Kar are close friends, and the future Delenn has urged Sheridan not to visit Z'ha'dum. We've heard of that planet before of course, and its return here is an ominous piece of foreshadowing.
With this episode's conclusion we say goodbye to Jeffrey Sinclair. He's always been one of the least popular characters in the series, with most fans broadly criticising his performance and expressing happiness that he quit after one season. As I've mentioned earlier, I've developed an enormous liking for both the character and the actor: he did understated work when everyone else was mugging for the camera. It's since been revealed that O'Hare suffered terribly from mental illness, including delusions and paranoia, and that he struggled to perform these final two episodes. I am so thankful that he did, because he successfully tied together the story of one of SF television's most underrated characters. Even before I knew of his illness he had impressed me. Now that I do know of it, he has impressed me even more.

Like the first part, this episode successfully generates a real sense of scale and grandeur: big sci-fi ideas played out on a large scale. It's one of the strongest episodes of the series so far. This leaves Season 3 with 12 good episodes out of 17, and a surprisingly strong quality ratio of 71%. Maybe there's something to this series after all.
Posted by Grant at 4:55 PM