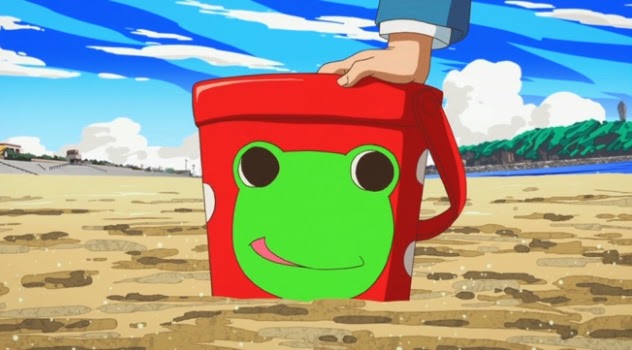 There's a very standard trope to a lot of anime: the protagonist needs to 'level up', basically learn a new skill that will somehow help them on their quest. This is very much one of those 'level up' episodes, since the entire half hour is pretty much dedicated to Yuki learning how to successfully cast a fishing line properly. I've seen many conversations over the years about whether anime is a medium or a genre: if it is a medium, it's certainly one that comes with an awful lot of standard techniques and conventions into which its various series, OVAs and movies slip.

I exaggerate: there are other elements to this episode. We get a tantalising glimpse of whatever Akira, the mysterious kid in a turban who carries a duck named Tapioca. He's part of an organisation of duck-themed secret agents, and is monitoring Haru and his sister - apparently because they're aliens. The DUCK (that seems to be the organisation's acronym) sequence certainly adds another wrinkle to the series, although they've hardly been in it enough to judge whether it's a good thing or bad.

Halfway through the episode Yuki's grandmother announces she's going into hospital. She insists it's because of over-eager doctors, but the implication is laid on pretty heavily. I actually rather liked this development; it throws a wrench into the overt silliness of the series, and suddenly forces it to tackle something a bit more down to earth and realistic - at least for a few minutes.

There is some great animation during the episode's climax, which really pushes the design aesthetic in an unexpected way. I liked it. Plus either I'm getting used to the music and Haru's voice, or the series is toning them down a little. Whatever the reason neither bothered me half as much this time around. I'm giving this episode the thumbs-up, although I'm still a bit on the fence as far as the series goes. Still, after three episodes I'm giving the series 67%, so I'm hopeful.
Posted by Grant at 5:29 PM