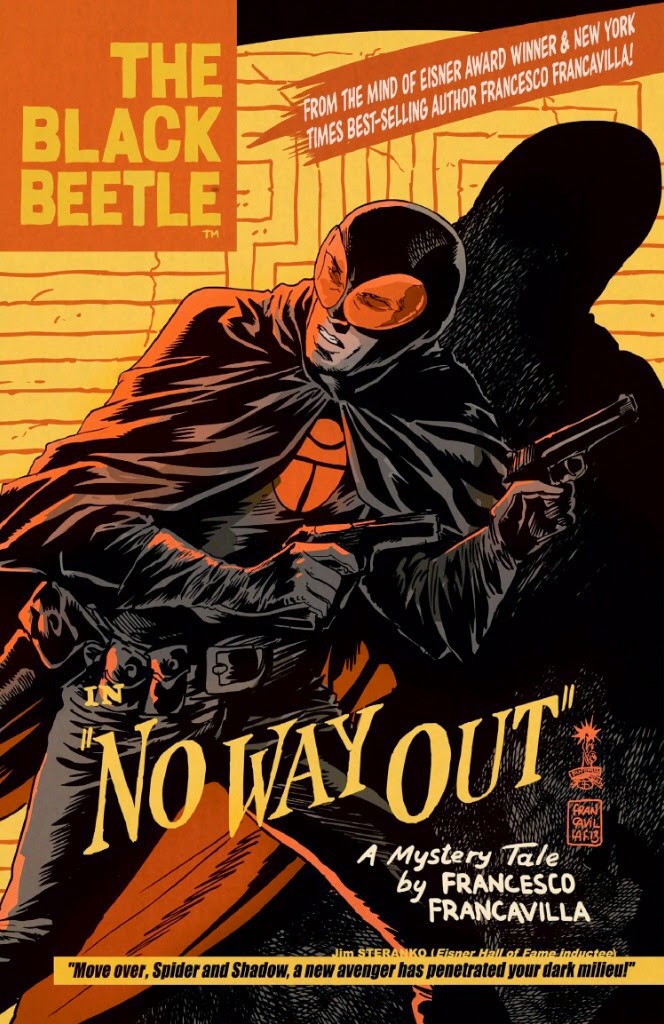 Francesco Francavilla is a stunning comic book artist, whose work I've been admiring for some time. He's completely in his element with Black Beetle, a deliberately old-fashioned pulp adventure about a 1940s masked American crime fighter. "No Way Out" is the first four-issue arc for this ongoing series of comic book miniseries, and it's been collected into a handsome hardcover edition by Dark Horse Comics.

The Black Beetle is a caped vigilante with a string of gadgets who fights crime in the north-eastern American metropolis Colt City. When an explosion takes out the key members of a local crime dynasty, the Beetle is hot on the case to find the culprit.

In terms of plot there is nothing particularly original going on here. It is, however, an extremely solid pastiche of pulp crime stories. It immediately brings to mind The Shadow, Batman and even other pastiches of this genre, notably Dave Stevens' The Rocketeer. Sometimes, if the script is tight and entertaining enough, you don't need too much in the way of original ideas. This is one of those comics: well-written, fast-paced and very entertaining.

The real star here is Francavilla's artwork. He's been doing quite a bit of Marvel Comics work in recent years, but I think his work here outpaces all of that. He has a slightly rough, expressive style as well as very clear, simple designs. Where he excels in particular is in his action sequences. There's one climactic martial arts fight that is a visual master-class in presenting action on a page. Francavilla's cinematic art style is such a perfect match to the material.

It's funny: I spent most of my time reading "No Way Out" with the desperate hope that someone might turn it into a feature film. It's not that the character is startlingly original - he's not original at all, even his name is incredibly close to the old Charlton Comics hero Blue Beetle - or that the plot is worthy of a big screen treatment. It's that Francavilla's art is so evocative and dynamic that it sort of felt like a feature film already.

The second miniseries, "Necrologue", debuts from Dark Horse in October. I can barely wait.
Posted by Grant at 7:01 AM