Babylon 5: "And the Rock Cried Out, No Hiding Place" 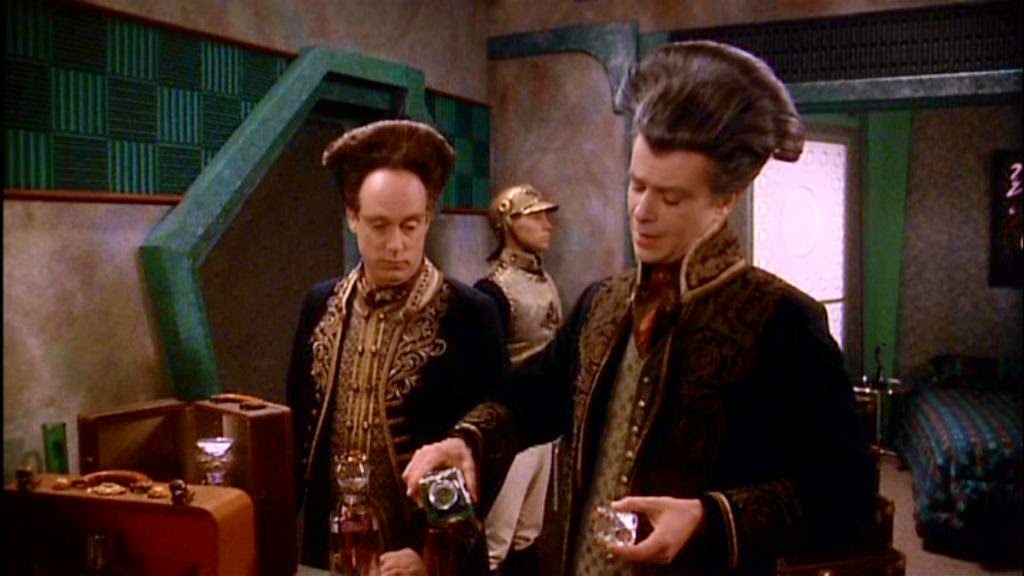 Lord Refa returns to Babylon 5 to continue his political game against Londo Mollari. Mollari meanwhile has his own plans to gain status within the Centauri court, involving Vir Cotto and his arch-enemy G'Kar. While that goes on Captain Sheridan focuses on the Shadows' next move from the war room, desperately looking for a pattern among their seemingly random attacks.

This episode is blessed with what is perhaps the longest and most elaborate titles of any Babylon 5 episode - and the series has had a few. Whether it's "And the Sky Full of Stars", or "The Geometry of Shadows", or even this season's Passing Through Gethsemane", Straczynski has never been afraid to be bold when titling his episodes. It makes other episodes like "Convinctions", "Knives" and "Infection" seem rather dull by comparison.

The title is from an old spiritual song, which forms a critical part of the episode's climax. It's rather cleverly used - but is the episode clever as a whole?

It is outstanding. This is one of the episodes that makes this re-watch of Babylon 5 worthwhile: the sort that forces me to admit that, while they're way off base 90 per cent of the time, the series' fans are right on the money praising episodes like this. The rivalry between Mollari and Refa has been building progressively for three years, and the long-form storytelling that Babylon 5 staked its reputation upon absolutely pays off in moments like this. The two men are circling each other like rival predators, and while Refa seems to have the uppet hand he is ultimately undone by Londo's final master stroke.

This is, for all intents and purposes, a sting operation. There's a mark - Refa - who needs to be taken out of play. There is a rival - Mollari - planning his downfall. That rival has assembled a team: Vir, various guards and intermediaries, and - rather shockingly - G'Kar. The audience is kept in the dark until the climax, when what seems like one plan gone awry turns into another plan altogether. When Refa learns that G'Kar is actually cooperating with Londo, and that it is himself - not G'Kar - who is a target, it completely rewrites an entire section of the series. We've been watching Londo and G'Kar fight for three seasons. It's been bitter, heartfelt and almost murderous upon occasion. We've witnessed an inexplicable flash-forward where they are the closest of friends, and now we've received our first glimpse on how that impossible future could somehow come to pass.

Refa's death is extremely brutal. He's basically beaten to death by a mob of vengeful Narns, in a scene that cuts back and forth from the Narn homeworld to a church choir singing the upbeat titular hymn. This sharp contrast between joyful song and brutal assault has been shamelessly pilfered from Bob Fosse's Cabaret, but Straczynski is smart enough to know that if he's going to steal he may as well steal from the best. It works brilliantly here, and is one of the best moments of the entire five-year run.

Meanwhile Sheridan and Delenn's romance finally reaches the passionate kissing stage. I actually quite like how they've developed it this season. Straczynksi has wisely taken his time, and both Mira Furlan and Bruce Boxleitner have developed it in growing amounts of physical intimacy - hands touching shoulders, and what-have-you - and prolonged glances. The episode does stumble a bit with Delenn's badgering of Sheridan to get out of the war room for a few minutes. She comes across like an old-fashioned sitcom wife in those moments, but it's not so bad that it ruins the rest of the episode.