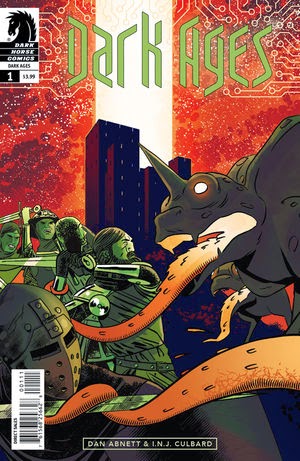 Dan Abnett should probably be getting a lot more attention by comic book fans than he is, since it was his and Andy Lanning's run writing Guardians of the Galaxy that led to that title becoming Hollywood's latest movie blockbuster. He had a new book out this week, the first issue of a four-part miniseries titled Dark Ages.

In the 14th century a group of English mercenaries fall prey to an unknown and terrifying monstrous force from the stars. The seek sanctuary at a local monastery - but there seems to be more evil shenanigans going on inside than out.

It's a promising first issue that sets up the protagonists, establishes the story and setting, and throws in more than a few hooks for future issues. The book is illustrated by I.N.J. Culbard in a very neat, fairly simple style that tells the story without excessive flourishes or unnecessary detail. The last page is an absolute doozy, and pretty much guaranteed I would be coming back in September for issue #2. (4/5)

Gail Simone's final issue of Batgirl is a little bit of a mess. It's visibly rushed together, as if two issues' worth of plot have been quickly jammed into one to get everything from the last three years wrapped up before the Futures End crossovers kick in. On the plus side, everything does get wrapped up, and Simone manages to do it with an unexpected mega-celebration of the DCU's female superheroes. This run on Batgirl has been plagued by editorial conflicts and pressures forcing it into grim, unnecessarily gritty places, but Simone's writing has been great throughout. A difficult period of Batgirl closes, but a really worthy period as well. (4/5)

With "Zero Year" now wrapped up, artists Greg Capullo and Danny Miki take the month off. Their replacement, Matteo Scalera, is to my mind one of the best new artists in American comics. His work on Black Science and Dead Body Road has been exceptional, and I was thrilled to hear he'd been picked up for this Batman one-shot. He doesn't disappoint: this slickly told little thriller sees Batman hunting down a serial killer who's been preying on Gotham's homeless in secret. It's dark, violent, and more than a little unpleasant, but it's also very well written by Snyder and guest co-writer Gerry Duggan, and brilliantly illustrated by Scalera. If there comes a time when Capullo and Miki hang up their capes, I have the perfect permanent replacement for them. (4/5)

A solid return to form for this uneven weekly series. Batgirl, Batwoman and Red Hood keep tracking down the villain whose technology was used to frame Jim Gordon. Gordon, meanwhile, deals with a rapidly escalating riot in Blackgate Prison. Batman and Killer Croc continue hunting through the sewers of Gotham. Red Robin and Harper Row keep plugging along in Tokyo. It's certainly a world-spanning, rather busy series. This issue entertained me because it didn't slow down and kept things interesting, but as always it's how these mini-arcs wrap up that concerns me. So far the book hasn't gone too smoothly with that. (3/5)

The second arc closes out in a slightly uneven fashion, wrapping up the key plot in the first half and then tying up loose ends for the remainder. I'm enjoying this series, but I do feel as if I'm not enjoying it as much as I should. The original concept - a government team investigating weird phenomena where the laws of physics have broken - was a great one, but it feels like it's become a little lost among the protagonist's quest to find his missing father and other subplots. Next issue sees a new artist joining, so I'll be interested to see how they compare to Rodriguez - whose art has been a highlight of the first 13 issues. (3/5)

This issue closes out this monthly Star Wars title. It's amiable enough stuff, pitting the crew of the Millennium Falcon against the robot assassin IG-88, but hardly feels like the big send-off that this title maybe deserved. It's been an unusually strong monthly series, and I'm not surprised that next year Marvel will be picking up where it left off with another monthly series starring Luke, Han and Leia between Star Wars and The Empire Strikes Back. Wood - and his regular collaborator Carlos D'Anda with him - should be proud: this was a Star Wars comic that actually looked and felt like the Star Wars with which I grew up. (3/5)

I'm not entirely sure what to make of this final regular issue of Worlds' Finest. It ties into Earth 2 and its upcoming World's End weekly series, and as a result doesn't really get an ending to itself. What it does give us, however, and rather unexpectedly, is a new Power Girl for Earth 1. Goodness knows where she's going to pop up in the future, but it's a development I really appreciate: DC's strength used to be legacy superheroes - new characters taking up the mantle of older heroes - and I keep hoping it will be their strength again. (2/5)