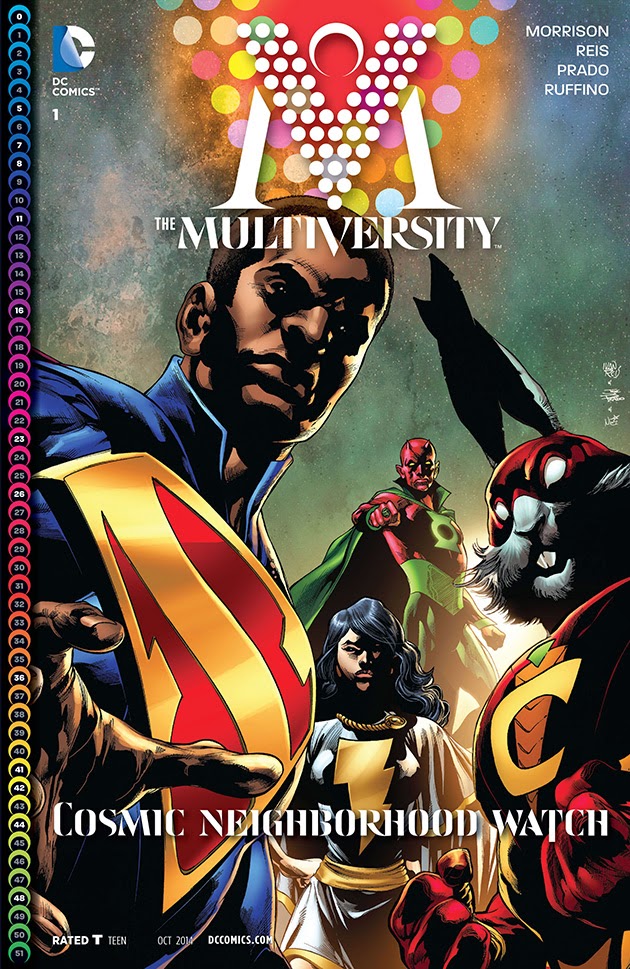 Since 1997 Grant Morrison has been on a slow-boiling gradual journey through the DC Universe. While he obviously wrote a bunch of stuff for DC prior to 1997 it was then that he and Howard Porter launched JLA, a high-profile and bestselling all-star version of the Justice League of America. Since then he's written for The Flash and Batman, as well as 52 and his massively hyped, somewhat divisive miniseries Final Crisis. Multiversity is pretty much his follow-up to that miniseries, since it prominently re-introduces Nix Uotan - the final surviving monitor of the DC Universe - and once again explores the 52 parallel universes that form DC's self-described "Multiverse".

Despite the extra length of this first issue, it's actually quite difficult to take a proper step back and assess what's going on. Some horrible Lovecraftian creatures - one of them's basically a giant bat-winged eyeball - are eating their way through the multiple realities of the DCU, and so Uotan pledges to assemble heroes from all 52 Earths to save the day.

Readers of Morrison's earlier DC work will be on familiar territory here, with a combination of weird ideas, characters that challenge the confines of the comic book medium, callbacks to obscure characters or points of continuity, and a blind assumption that the reader will either keep up or be patient enough to see it all made clear by the series' final issue. Reis and Prado do a great job illustrating it, so all in all this is a dense but entertaining package. Our star, for this issue at least, is actually Calvis Ellis, the Obama-inspired African-American Superman of Earth-23. He's great: I'd happily read a monthly comic with him as the star.

One idea that crops up here that I absolutely adore is that the superheroes of one reality bleed into the other via their pop culture, so the Superman of Earth-23 might be able to pick up and read a comic book that's actually relating events in the life of the Batman of Earth-5, or what-have-you. It's bonkers, but it's brilliant.

The bottom line is that if you appreciate Morrison's dense, "everything thrown at the wall" superhero events, then you're going to most likely enjoy Multiversity. If his work leaves you cold or annoys you, there's not a moment here that's going to change your mind. Personally I liked it. (4/5)

Under the cut: a big week, with reviews of Batman and Robin, Batman Eternal, Batwoman, Daredevil, Eye of Newt, Infinity Man and the Forever People, The Last Broadcast, Ms Marvel, Teenage Mutant Ninja Turtles, Umbral and The Wicked + the Divine.

Now this is more like it. I'm been pretty lukewarm on the last few issues of Batman and Robin, as the "Robin Rises" storyline kicked in, but this issue doesn't just finally push that plot into gear - it also progresses the characters of the Bat-books in general. Conversations that needed to take place between Batman and his companions finally occur. Things move forward. I was also quite surprised at a scene late in the issue between Batman and Lex Luthor: I knew that Geoff Johns had been pushed Luthor into a sort of semi-heroic character via Justice League, but seeing it in action here it's really impressed me. All it's taken is one issue, and I've gone from ambivalent to enthused. It's great. (5/5)

There's one genuinely great twist in this issue that I didn't see coming. What it means for Jim Gordon's prison sojourn is yet to be seen, but it does strongly suggest a major status quo change for one of Gotham's other main players. At any rate it gives that plot thread a badly-needed shot in the arm. Batman and Killer Croc's sewer adventure gets wrapped up in a fairly perfunctory manner, as does Batgirl's South American adventure. As for Red Robin and Harper Row, they're nowhere to be seen this issue. There is a great development in the final pages, though, that I suspect will make a lot of pre-New 52 Batgirl fans very happy. (3/5)

Well the long-feared split between Kate Kane and Maggie Sawyer has finally happened. It happened by editorial mandate, and was one of the main reasons that Williams and Blackman both quit the book they made one of the New 52's best. Now it's a shadow of its former self, with Batwoman fighting... oh I honestly don't care. This is basically Batwing all over again: an intriguing set-up for a superhero comic that tries to be a little different, that's pulled back onto safe (and dull) territory by a risk-averse publisher. Sales are plummeting on this book, so to be honest I don't see it surviving for too many more months. It doesn't deserve to. (1/5)

Last month I was annoyed at Waid's introduction of yet more angst and heartbreak for Matt Murdock, after all the work he'd done making Daredevil a brighter, more positive book. I should have had some patience, since this issue re-aligns those revelations and transforms this issue into one of the best I've seen Waid write for the title. Once again I didn't see the plot twists coming; Waid is really good at this. My only complaint is with the African nation of Wakanda, which always strikes me as appallingly tokenistic and contradictory: essentially half-naked African tribespeople with laser guns. Heaven help Marvel Studios when they try to adapt Black Panther to the cinema. (4/5)

This is just faultless: a lyrical, stunningly beautiful high fantasy short story told in comic book form. Newt continues his journey through the Netherworld on his quest to find the perfect power source for his staff. He's aided by a troll, young Morgana le Fay and a suspicious giant toad. This issue has magic, dragons, mer-people, lakes, forests, mountains and caves. It's all perfectly illustrated by Hague in a distinctive and highly appealing style. I really hope that Dark Horse give this miniseries (one issue to go) the collection edition it deserves: hardcover, maybe even oversized. It's just a gorgeous book. (5/5)

Infinity Man and the Forever People #3

This is a readable, old-fashioned superhero book. It feels like something dropped out of the early 1990s. Now sales have been catastrophic, so I suspect it won't be here beyond its sixth issue. For now it's entertaining me well enough. I can't call it a must-buy, I can't even recommend it too strongly, but it's enjoyable and at $2.99 isn't ridiculously expensive. Plus I do love the New Gods stuff. It's visually iconic, hopelessly simplistic and a hell of a lot of fun. (3/5)

Ivan is on the run through a repurposed Alcatraz. Three weeks earlier, he's using his hypnotism skills to track down the mysterious Warehouse 23. This complex thriller of secret societies and magicians is just getting better and better, and with three issues to go it's on track to be one of the best comic miniseries of the year. It's got a deliberately moody, muted colour scheme, a sort of manga-inspired but distinctive art style and a clever, ever-developing script. It's also the most handsomely packaged book on the comic shop shelf at the moment. (5/5)

This is easily the most adorable single issue I've read in about a month, teaming a bright and enthusiastic Ms Marvel with a surprisingly supportive and friendly Wolverine. G. Willow Wilson writes a gut-bustingly funny script here that also finds time to develop Kamala Khan's character and start providing an explanation for her newfound super-powers. Guest artist Jake Wyatt does a great job, particularly with one splash page that looks more like a cut-away diagram than a single image. It's really cool, entertaining stuff. Given the absolutely awful artwork Marvel have revealed this week for their forthcoming Spiderwoman comic, it's a relief to see that the company can still produce positive and entertaining female-led comic books when they try. (5/5)

This is just a fun piece of fluff. I make no excuses for it, and at the same time I'm not going to actively recommend this book to you unless you're already a fan of the TV cartoon. It's a great adaptation, maintaining the same humour and tone, and presenting two self-contained short adventures. In one, Donatello tries to invent a pheremone-enhancing spray that only attracts insects. In the other, Michaelangelo's lack of focus gets him captured by Baxter Stockman. A comic just for kids? Absolutely, but it's a really solid comic for kids. (3/5)

Rascal and her companions continue their escape from the Umbral, with a growing sense of foreboding as they go. There's an enormous sense of atmosphere presented here, partly due to Johnston's script but mostly I suspect due to Mitten's wonderfully foreboding artwork. There's a real sense that any minute now the other shoe is going to drop and things are going to get very frightening and desperate indeed. I've really felt that in recent years there's been a real wealth of strong science fiction comics. Now, between titles like this, Rat Queens and Eye of Newt, it seems fantasy is getting a look-in as well. (4/5)

I could honestly look at Jamie McKelvie illustrations of people's faces all day long. He's incredibly good at capturing little nuances of expression in characters, and it's a skill put to great use in this Morrison-esque urban fantasy comic. Gods are reincarnated in human form, and one of them - Lucifer - is now imprisoned for a murder she didn't commit. This issue doesn't feel quite as strong as the first two: much of the issue is taken up by a god-versus-god fight in the London Underground, and it doesn't quite match the energy and spark I've come to expect. It's still remarkably good stuff though. (3/5)