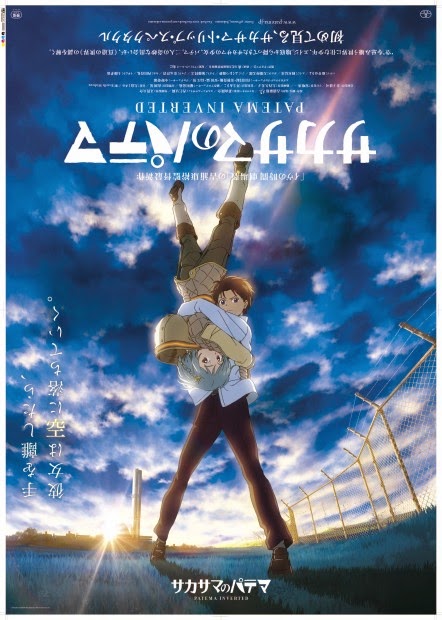 Patema is an adventurous teenage girl living in an underground city. One day, while exploring, she finds herself falling down to an incredible upside-down world below. If she lets go, she'll fall into the sky forever. Thankfully she's just met upside-down local Age to hold her to the ground - but the oppressive authorities of his world are desperate to ensure Patema isn't around long enough to cause any trouble.

It's a tough time for original anime features. Each year it seems like more and more theatrical releases are adaptations of videogames or toys, or expansions of pre-existing television series. With the retirement of Hayao Miyazaki and Studio Ghibli's suspension of new productions, the horizon for original anime seems particularly bleak. Thank goodness there are still new directors like Yasuhiro Yoshiura to create beautiful, emotionally stirring productions like Patema Inverted.

All good films, whether animated or live-action, are going to rise or fall based on their characters, and it's here that Patema Inverted excels. Patema and Age are immensely appealing protagonists, and their bond is immediate and instinctive. The film is focused almost exclusively upon them, with only a little time spent with the supporting characters. There's more than a little of Studio Ghibli in them, particularly earlier Miyazaki films like Nausicaa of the Valley of the Wind and Laputa: Castle in the Sky. I suspect Ghibli fans will lap this movie up.

Stylistically the film is marvellous. Yoshiura had done a sensational job portraying a world with two peoples for whom gravity runs in opposite directions. It's a mad concept, but he not only makes it visually impressive but it never gets confusing - and as the film's physics develop to near Nolan-esque levels that's a serious feat indeed.

This is a sensational anime feature, and deserves to be seen by as wide an audience as possible. I hope to see many more films this good from Yasuhiro Yoshiura in the future.
Posted by Grant at 10:21 PM